#dogsatpollingstations trends on Twitter as pooches visit the polls 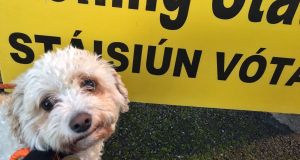 The President could change in the coming days, but the tradition of Irish voters bringing their dogs to the polls seems to be going nowhere.

The hashtag #dogsatpollingstations trended on Twitter on Friday, with voters sharing pictures of their pets as they arrived to take part in the presidential election and blasphemy referendum.

With more than 3.2 million people entitled to vote in 40 constituencies, many used their canine friends to encourage others to exercise their democratic right.

“Hugo among the #DogsAtPollingStations. Now Go And Vote for MichaelDHiggins,” wrote Bernard Harbor with an image of his dog, tagging incumbent President Michael D Higgins.

“Buffy says make sure you get out to vote today!” tweeted Siobhan Quill.

Me and Mr Dog exercising my democratic right #dogsatpollingstations pic.twitter.com/kYaPl8kJd0

Polling stations were due to open across the country from between 7am and 10pm, with the electorate also being asked whether they wanted to remove the offence of blasphemy from the Irish constitution.

“Gabby has given Miggeldy her number one and voted to remove blasphemy from the constitution,” wrote DogsForChoice.

“Miggeldy” refers to President Higgins, one of six candidates in the election.

While some promoted their favourite candidate, others took the opportunity to suggest dog-friendly policies.

Much of the social media activity around #dogsatpollingstations is light-hearted, but Mr Lafferty said the trend “strikes a chord” with many.

“It brings a sense of colour to an otherwise dry subject matter,” the 45-year-old from Donegal told the Press Association. “To [dog lovers], there is a dog-human bond there that no politician could ever establish.

“People trust in the loyalty of their dog, way more than of a politician.”–PA