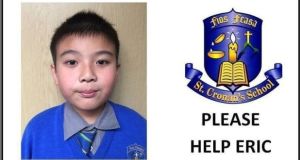 The nine-year-old is a fourth class student in St Cronan’s Boys National School in Bray, Co Wicklow and, although born in Ireland, he is not a citizen. He had been facing deportation.

Mr Harris, who lives in Eric’s constituency, made representations to the Department of Justice and Equality on his behalf.

Today Mr Harris said he had received some “good news” from the Department of Justice.

“I’ve just got some good news, very recently from the Department of Justice, which I’ve conveyed to Eric’s family, that there is no imminent threat of deportation,” he told Today FM.

“That’s all I ever called for, that’s all Eric’s family ever asked for, was an opportunity for a humanitarian review of the case to take place.

“The idea that a nine-year-old boy who is as much from Wicklow as I am, as much from Ireland as I am would be told that he is “going back” to China, a country he had never been to, was simply ludicrous,” said Mr Harris.

Newstalk presenter George Hook came in for criticism online after he tweeted questioning why Mr Harris was “worried about a Chinese boy” when the number of people on trolleys in the health service was at “world record levels”.

“The Chinese boy is the responsibility of the Minister for Justice not Health,” he added.

In a subsequent post Mr Hook said: “Can we analyse the outrage? Did I call for his deportation - no. Did I call him Chinese - yes. He is not Irish under our law.”

A petition signed by over 50,000 people was started by St Cronan’s pupils more than a week ago asking Minister for Justice Charlie Flanagan to revoke the deportation order and allow the boy to stay in Ireland.

Eric’s mother Leena Mei Mei Xue arrived in Ireland 12 years ago. Her attempts to regularise her residency failed, and a deportation order was served against her in 2015. A last appeal was rejected in June.

She presented Eric’s birth certificate to immigration authorities at their request last week and said they told her they would be preparing travel documents so that she and her son could be deported to China.

His mother said she has been asked to return to the Garda National Immigration Bureau later this month.