Peter Casey got support from 28% of rural voters – poll 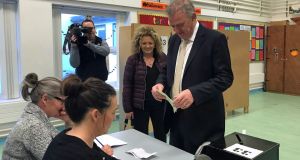 The Ipsos/MRBI exit poll conducted for The Irish Times confirms that voters have re-elected Michael D Higgins on 56 per cent, and with a comfortable majority over the runner-up Peter Casey on 21 per cent.

The same exit poll reveals overwhelming support for the Government’s proposal to amend the Constitution to remove the reference to blasphemy with 69 per cent voting Yes.

The poll was conducted yesterday at 160 polling stations among almost 4,500 voters. Voters were asked to complete mock ballot papers as they exited the polling station.

While the re-election of Higgins was very clearly signposted, the late surge in support for Casey will raise more than a few eyebrows. Casey’s controversial remarks on the Traveller community appear to have boosted his appeal significantly, as prior to making these comments he had received just 2 per cent support in the last Irish Times/Ipsos MRBI poll.

Casey’s jump in support has come predominantly from voters in rural areas (28 per cent) and in Connacht/Ulster (29 per cent). He is also more popular among older voters, with 23 per cent giving him their first-preference vote.

Of the other candidates, three – Ní Riada, Gallagher and Freeman – all have broadly similar levels of support, ranging from 5 to 8 per cent. Duffy polls the lowest of the six candidates on 2 per cent. Ní Riada’s vote is strongest in Connacht/Ulster (10 per cent), with Gallagher’s vote strongest among those aged 65 and older (10 per cent). Freeman’s vote is broadly consistent across all population groups.

Can we rely on this Irish Times/Ipsos MRBI exit poll to accurately predict the result? Past experience gives us some confidence. Ipsos MRBI conducted exit polls for both the 2016 general election and the referendum on the Eighth Amendment earlier this year. Both were highly predictive of the final result. For example, the exit poll for the referendum in May projected a Yes vote of 67.7 per cent, compared with 66.4 per cent when the votes were counted the following day. This is within the statistical margin of error.

Accuracy in exit polling relies on a cocktail of ingredients. It is built on a model that seeks to anticipate the number of voters that will turn out at each polling station, as well as reflecting the shifting voter profile over the course of the day. The sample of polling stations selected for polling needs to echo the nation’s economic and political diversity.

Speculation throughout yesterday was of a low turnout. Analysis of the profile of voters yesterday compared with both previous exit polls suggests a disproportionate decline in younger voters.

Even accounting for statistical margin of error, these exit poll findings are in line with expectations and confirm both the passing of the referendum and the re-election of Michael D Higgins as President.