‘A gateway to normality’: Dublin Zoo reopens after three months

Conor Pope visits an eerily quiet Dublin Zoo which closed on March 12th due to coronavirus restrictions and after a number of staff layoffs is being operated by an animal care team and some support staff. Video: Bryan O’Brien 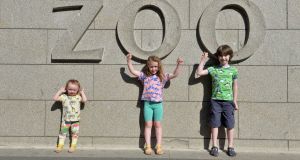 (L-R) Aria (1), Isla (5), and Eddie (7) O’Connell from Phibsborough are among the first arrivals at Dublin Zoo which has reopened to limited numbers. Photograph: Alan Betson / The Irish Times

Children roaring like tigers and aping the moves of primates in between peals of excited laughter as they wait impatiently to get through the gates of Dublin Zoo has been a sound of an Irish summer for more than 150 years. But it has been absent from 2020 until now.

On a gloriously warm and sunny Tuesday morning in early June, the city’s premier attraction opened its doors for the first time in almost three months.

While Covid-19 restrictions have seen a dramatic curtailment in the numbers allowed in, a tightly controlled one-way system and access to all-indoor spaces closed, the zoo’s return was still well able to lift spirits – of staff and visitors.

“It’s great to see real people again,” laughed the zoo’s operations manager, Gerry Creighton, as he watched a small and impeccably maintained socially distant queue form outside the gate ahead of its scheduled reopening at 9.30am.

Under the Covid rules only those with prebooked tickets are allowed in, and numbers are strictly limited to 500 people in the mornings and a further 500 in the afternoons with the zoo closing for an hour in between the two. The restaurants, shop and Reptile House are all closed.

None of the new rules dimmed the anticipation felt by Erin O’Toole and Michelle Leonard who had brought three children from Firhouse after spending much of Sunday morning on the zoo’s website trying to secure the golden tickets.

“They are just so excited,” Ms Leonard said, gesturing toward the children roaring like lions at her feet. “And can you blame them? This is the first thing we have been able to do since the lockdown started.”

Jason Quinn and Jeanne Doyle had their toddler twin sons with them on a long overdue visit. “They were supposed to come here for their birthday in March but that got cancelled and we ended up getting goldfish for them instead. We are all so excited we can hardly contain ourselves,” she added.

Lavinia McClelland from Castleknock was, if anything, even more excited. “When I managed to book the tickets yesterday it was like I’d won a free trip to Dubai,” she told The Irish Times.

Her two-and-a-half year old son “has been asking five times a day every day when he can go back to zoo. It has been so sad. It has been heartbreaking. How can you explain what has been happening to a baby? But now we have this and it fantastic, it is bright light and a sign things are beginning again. This is a gateway to normality.”

And then she was through that gateway and into the zoo.

Aoife Lattin and her mother, Deirdre, were trying to wake 16-month-old Noah who had nodded off on the journey in from Swords – possibly because his excitement level at the promised of a day out at the zoo had him up very early. His mother and grandmother were pretty happy too.

“I am a teacher and would normally be preparing for the State exams today so it is just very surreal to be here,” said the younger Lattin. “It is brilliant and an important step.”

The importance of the day was not lost on zoo director Leo Oosterweghel, and he betrayed traces of excitement beneath his normally laconic and impenetrable exterior. “The zoo is part of people’s lives and there is this amazing sense of ownership,” he said.

He pointed out that on a warm summer’s day the zoo would “maybe have six or seven thousand people and now will have to keep it to 500 in the morning and 500 in the evenings, but it is a start. This is a trial period, and we have a big site so are very comfortable we can adhere to social distancing rules.”

As ever, the animals he cares for were foremost in his thoughts. “They have been very well looked after by the keepers in recent weeks, and there has been this great curiosity when I have walked past them. I think it will take a few weeks for them to settle back into the old normal.”

For now we are still in the new normal. “We have been planning and preparing for weeks, and while there are limitations and restrictions, with such small numbers coming people will get a real opportunity to see the animals who are so curious about people now that they will be craning their necks to look back, if they have necks that is.”