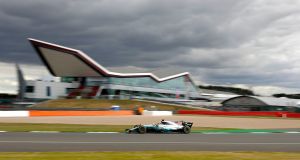 Silverstone will stage two races in August as part of the opening eight races of the 2020 season, Formula One has announced. Photograph: PA

Formula One has confirmed its rescheduled calendar for the European leg of the 2020 season, with racing to begin in Austria on July 5th. After 10 race cancellations the sport has settled on a plan for eight meetings in Europe all held behind closed doors.

The British Grand Prix at Silverstone is included in the calendar for August but its confirmation remains subject to government coronavirus restrictions.

The season will open with two races at the Red Bull Ring on July 5th and 12th before the teams head directly to Hungary for a third meeting on July 19th. The British GP will be one of two races at Silverstone on August 2nd and 9th. They will take place only if the government relaxes the 14-day quarantine rule on entry to the UK or if F1 is granted an exemption. The sport is expected to be given dispensation this week.

It is understood Hockenheim will step in to host the races if restrictions remain. Barcelona will then hold the Spanish Grand Prix in Catalonia on August 16th.

Spa and Monza will conclude the European meetings with races on August 30th and September 6th, the dates they originally held in the calendar. The second race in Austria will be named the Steiermark Grand Prix after the region in which it will be held and the Silverstone race the 70th Anniversary GP, celebrating the sport’s heritage since the first championship in 1950.

F1 said in a statement: “Due to the fluidity of the Covid-19 situation internationally, we will be finalising the details of the wider calendar and hope to publish that in the coming weeks with an expectation of having a total of 15-18 races before we complete our season in December.

“We expect the opening races to be closed events but hope fans will be able to join again when it is safe to do so. The opening calendar will include holding two consecutive events at the same circuit one week apart as well as a number of back-to-back events.”

Chase Carey, the F1 chief executive, said. “While we expect the season to commence without fans we hope that over the coming months the situation will allow us to welcome them back. But we know the return of Formula One will be a welcome boost to sports fans around the world.”

The only time F1 has held a triple-header of races was in 2018 when the French, Austrian and British grands prix were run one after the other. The sequence proved to be wearing for teams and the intent was not to repeat it. However with time limited to achieve as much racing as possible this season, they have accepted multiple three-race runs. More are expected when F1 visits Asia and the Americas.

Canada and Singapore remain under consideration before proposed meetings in Azerbaijan, Russia, China, Japan, the US, Mexico, Brazil, Vietnam, Bahrain and Abu Dhabi.

Teams will vote this week on F1’s proposal to hold reverse grid qualifying at the tracks hosting two back-to-back races, Austria and Silverstone. The concept is that a 30-minute race with a grid ordered in reverse championship standings would decide qualifying positions for the second race. F1 and broadcasters are eager that the second race at the same venue is in some way distinguishable from the first.

The idea is understood to have broad approval but Mercedes are opposed. They have previously voted against F1’s attempt to trial a reverse grid format this year, saying it is a gimmick that detracts from the sport. Unanimity across the 10 teams is required for the rule change to go through.