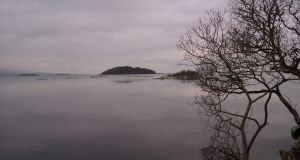 A boy is believed to have fallen from a dinghy which may drifted from the shoreline in Lough Mask, Co Mayo. Photograph: Lenny Antoneli

A search operation is underway on Lough Mask, Co Mayo for a five-year-old boy who is believed to have fallen out of a dinghy.

Gardaí and the Coast Guard began the search on Monday after the alarm was raised at 6.30pm, when the inflatable boat was spotted in the water.

The missing child is reported to be from the local area and believed to have fallen from a dinghy which may drifted from the shoreline.

The Coast Guard helicopter, based in Shannon, Co Clare, conducted an aerial survey of the lake on Monday evening, while search teams worked to locate the boy.

The local Lough Mask water rescue team has also been involved in the operation, along with the local mountain rescue service. Local residents and divers have also been assisting.

A Garda spokesman confirmed that emergency services were alerted to the missing boy on Monday evening, who was last seen on the Toormakeady side of the lake.

The search will continue for as long as possible on Monday night, and is expected to resume at first light on Tuesday morning.

1 Maureen Dowd: Biden has his limitations but he’s no Trump
2 US passengers fly into Dublin: ‘I’m here for six days. I guess I’ll have to stay inside’
3 People with foreign accents should not be ‘assumed’ tourists - NPHET
4 Covid-19: 200 to 250 people arriving in Ireland from US daily - Coveney
5 New parents to get three weeks of extra paid leave due to pandemic
Real news has value SUBSCRIBE