The game was expected to bring in 40,000 American visitors to Ireland 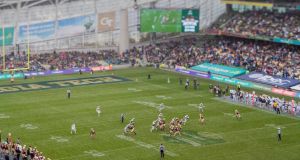 The meeting of Navy and Notre Dame at the Aviva stadium in August was calculated to be worth over €80 million to the Irish economy. Photograph: Inpho

Billed as our biggest invasion from America for any single event, organisers of the 2020 College Football Classic have been left counting the cost of cancelling the game originally set for the Aviva Stadium on August 29th.

Including, by the organisers’ own “conservative” estimate, the some €80 million loss to the Irish economy.

Tuesday’s decision to cancel followed ongoing consultation with the Irish Government, medical authorities and the competing teams from Navy and Notre Dame, and taken against the backdrop of some continuing restrictions around Covid-19. Just under 40,000 tickets (39,566) had been pre-purchased by Americans set to travel, with full refunds being offered.

“In the main, it is a refund policy,” said Padraic O’Kane of event organisers Irish American Events Limited (IAEL), a joint venture between Corporate.ie and Anthony Travel who have been involved in previous college football games in Ireland.

“Everybody is being sent back to their point of ticket purchase, including the travel partners, and to work it through from there.

“We do have some options to offer a transfer into the 2021 game, particularly around hospitality. Everyone will have different requests, in how they might want to handle it, but the vast majority of these people will have booked flights and hotels themselves, so it will come down the personal arrangement with their airline carrier and their hotel and so on.”

That will include Aer Lingus, the event’s headline sponsors, although many were due to travel on American carriers. The game was set to mark the opening tie in the 2020 NCAA college football season and it is now the intention that the game will go ahead at the Navy-Marine Corps Memorial Stadium in Annapolis.

That game now becomes the focus of IAEL, and O’Kane believes it can also be billed as some way of “kick-starting” the Irish-American tourism trade after the sudden and severe drop-off around the coronavirus.

“We’ve been working on this for two years, and we felt that three months out, if there wasn’t a major improvement in terms of health and safety, for both our visitors and people here in Ireland, we could no longer proceed on that basis. Unlike some other major events, we didn’t have any major infrastructure to build. The Aviva was already there, but three months out is the right time, any longer would have been unfair.

“We sat with the colleges again last week, and with so many uncertainties still around international travel, whether or not either country might go back in the road map, we made this decision. There were options looked at, could we reduce the numbers travelling, but to be fair to everybody none of them were credible. No one caused this problem, and it’s just one we have to grin and bear, but we are hopeful we will get these two teams back, possibly as early as 2022.

“We also called this much more than a game. The people coming in would stay an average of seven nights, three or more in Dublin, and rest all around the country. And we’ve estimated, conservatively, that this game will mean a loss to the economy of €80 million directly, and indirectly in things like the live coverage that was due to come with it, ESPN-viewing of an estimated six million, and we also had academic and networking events planned around this too. That’s all put on ice as well.”

Asked if a significant number of those 40,000 Americans might still travel, and what threat that might present around Covid-19 even three months from now, O’Kane said: “A number of people may well still travel, but I would say the vast majority will hold off, and come back when the next game suits them.

“By the end of August, the country will be out of lockdown. We’re all already talking about the domestic holiday season, and it’s important to say as well that this wasn’t a one-game model, it was a five-year model, and we’re already planning ahead to 2021.

“When Notre Dame and Navy played here in 2012, that helped kick-start the economy, after the recession. And with the new Tourism Recovery Committee, we will want to put a specific campaign around this, into Ireland in 2021. It’s the same with any other major event right now, there is a risk, but we still have to plan ahead, hoping there will be a return to some level of certainty by 2021.”