The animals are baffled at Dublin Zoo – what happened the humans?

Conor Pope visits an eerily quiet Dublin Zoo which closed on March 12th due to coronavirus restrictions and after a number of staff layoffs is being operated by an animal care team and some support staff. Video: Bryan O’Brien 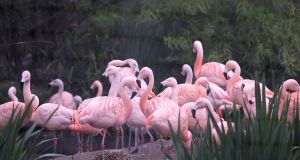 Dublin Zoo today is equal parts magic and tragic. The excited shrieks of families marvelling at big cats and gasping at the acrobatics of sea lions have been silenced and the gaggles of school tours laughing as they play under the big tree near Haughton House are gone.

Yet in the absence of humans there is wonder in the wild sounds made by the animals – big and small – who have the place to themselves.

Small ducks waddle along paths untroubled by human feet, flirting with each other as they trip lightly along their way. They are watched by a pride of biblical lions lounging at the front of their enclosure, while the macaques nearby throw fresh straw at each other as tigers prowl, alert to every move made by the handful of people who pass them each day.

The elephant family does its own thing, as it always has done.

More than six weeks ago the zoo – which is among the top tourist attractions in Ireland with over 1.2 million visitors annually – closed its doors to all but a core team of socially distanced zookeepers working in strictly controlled groups to combat infection.

They are watched over by zoo director Leo Oosterweghel. He has been at the helm of Dublin Zoo for almost 20 years, and never once imagined he would see days like this. His home is the zoo, and he is the person best placed to record how the absence of people has impacted on the animals he cares for.

“They look at me with more surprise now,” he says. “They come up and have a good look because they’re wondering what’s happened to everyone else. They are used to visitors.”

Before the zoo closed it employed over 100 people – only 40 remain.

“Most of our people have been laid off,” the director says. “All we have now is the animal care team and some support staff. We had to let so many people go and that has been extremely difficult. It is hard to tell someone they are non-essential because we are such a close-knit team here.”

Dublin Zoo was first conceived in the Rotunda Hospital in 1830 by a group of medics with a view to providing entertainment for well-heeled Dubliners and easy access to animal corpses for doctors. Once animals – specially the primates – had outlived their usefulness as spectacles their cadavers were prized for research purposes.

It could scarcely be more different now. Today the animals always come first. The zoo’s main focus is their welfare and conservation, and much of the money it raises each year funds projects across the world aimed at protecting endangered species in the wild and developing critical breeding programmes in captivity.

“We have had to slow down our conservation efforts because every euro counts. And that breaks your heart,” says Oosterweghel.

But there are steps he will never take no matter how difficult things get.

“I have heard of some zoos talking of animal euthanasia to reduce their costs, but that is never going to happen here, not on my watch. It is not even discussed.

“We have all of the costs and none of the revenue,” he says.

The food bill alone is close to €10,000 a week, added to which is the cost of wages for the essential staff. As a self-funding charity, the zoo gets no aid from the State but Oosterweghel says the zoo may need a “bridging loan” in the weeks ahead.

While times are bleak, the zoo perhaps has an advantage over many attractions as it is outdoors and spread over 60 acres of the Phoenix Park. Yet even so social distancing in the future will have to be carefully managed. “We don’t know when we will reopen or what we might look like when we do,” he admits.

He has given up speculating as to when that day might come. “It all depends on what the Government tells us to do, and when we can do it.”

Just as it is beyond the zoo’s high fences, health is of utmost concern.

“The virus is very much on our radar, and we have sharpened our protocols. From the start the zookeepers looking after primates wore mask because we knew there could be cross-transmission . They now wear masks when looking after the cats too.”

That happened after it emerged in early April that a tiger at New York’s Bronx Zoo had tested positive for Covid-19 after contracting it from a caretaker who was asymptomatic at the time.

As Oosterweghel talks and walks, the pink flamingos stand silently on little islands in their enclosure. Then one sees humans and starts squawking. Soon it is joined by dozens of excited others. Once the humans turn a corner, the flamingos fall silent again.

Around that turned corner the sea lions are putting on a show for zookeeper Daniel Dunne. His job in recent weeks has been to “ensure that they are stimulated and exercised and fed and taken care of”. He also makes sure their habitat is in pristine condition.

Like all the zookeepers he has been working in a small team with no interaction with others. He admits that it has become a little lonely.

Nearby the tigers are having lunch at the front of their enclosure, seemingly unconcerned or even aware of the presence of people. But when we turn to walk away one of them is upon us in an instant, only inches away and separated by some thankfully thick glass. “You turned your back and their instinct is to go after you as prey,” Oosterweghel says.

They don’t go after him, though. They high-five him instead. He casually places the palm of one hand on the glass and one of the great cats immediately responds by rising up on hind legs and putting a giant front paw in the director’s hand – or as close to it as the glass allows. The bond is impossible to miss.

“I don’t doubt for a second that they have noticed that the humans are not around because they are super-smart and nothing gets passed them,” she says. “But they are just so focused on their own family unit, and they just want to eat and play and roll in the mud, so they’re okay.”

As we walk away she shouts after us “it’s nice for us to see other people though”. She sounds lonely too.

Oosterweghel walks past the zoo’s farm. A cow approaches him for a nuzzle, a sheep looks on with jealousy in her eyes.

“It is so quiet now,” he says sadly. “You can really take your time walking around looking at the animals. But unfortunately we cannot share it.”

Not now, perhaps, but soon. Hopefully.