The best biopics, documentaries, cartoons, features and award favourites of the year 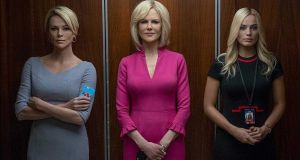 What a cornucopia of delights are coming our way in 2020. We offer a few warnings. One or two of these may slide into 2021. On the upside, the odd exciting project marked down for that year – Paul Thomas Anderson’s child-actor drama for instance – could be finished earlier than anticipated. At any rate, we’re not including anything that doesn’t yet have a title. And, yes, Avatar 2 has been kicked back another 12 months.

This is the one with Kate Winslet and Saoirse Ronan as romantically entangled palaeontologists in Victorian England. Francis Lee, director of God’s Own Country, is behind the camera.
Expect late 2020

We’re calling this our most anticipated release of 2020. The guts of a decade after Holy Motors, Leos Carax directs Adam Driver and Marion Cotillard in a musical scored by the mighty Sparks. Yes, Sparks!
Expect autumn 2020

Making an appearance for a second year running. Kenneth Branagh’s take on the Eoin Colfer fantasy was kicked from 2019 to 2020 as Disney reorganised in the wake of the Fox takeover.
Opens May 29th

David Freyne, who scored a critical hit with The Cured, gives us a comedy – yes, it does concern people pretending not to be gay – starring the brilliant Fionn O’Shea and the no-less-brilliant Lola Pettigrew.
Expect mid 2020.

With Things to Come, Mia Hansen-Løve became one of the era’s essential auteurs. Her latest stars Mia Wasikowska and Vicky Krieps in a tale set on the island where the eponymous director dreamt up his masterpieces.
Expect autumn 2020

Long-delayed sequels are not always a great idea, but the notion of a middle-aged Bill and Ted is hilarious in itself. Keanu Reeves and Alex Winter are reunited for time-travel larks.
Opens August 21st

Birds of Prey: And the Fantabulous Emancipation of One Harley Quinn

Sorry? What? I dozed off while you were running through the title. Can Warner Brothers salvage something from the mess that was Suicide Squad? Well, they have Margot Robbie back as Harley. So it’s possible.
Opens February 7th

Workers of the world, rejoice. The summer starts on May Day this year. Scarlett Johansson finally gets the standalone Black Widow movie she deserves. The superb Florence Pugh is in support.
Opens May 1st

Charlize Theron plays Megyn Kelly in a study of sexual harassment at Fox News. Nicole Kidman and Margot Robbie are also on board to further justify the loaded title.
Opens January 14th

Spike Lee got himself right back at the centre of the conversation with BlacKkKlansman. Now he moves on to a drama concerning a group of Vietnam vets who return to the jungle. Chadwick Boseman stars.
Expect late 2020

Oh, please may Tom Hardy be playing the Fonz! He’s not. He’s playing Al Capone in a film whose structure sounds eerily close to that of The Irishman.
Expect summer or autumn

Wes Anderson knows how to pack in the stars, but he excels even himself in this yarn about American journalists in France. Saoirse Ronan, Timothée Chalamet, Kate Winslet, Bill Murray and many, many more. (We direct you to IMDb.)
Expect in the summer

Yeah, well. If it happened first in the 1980s you can count on it happening again (and again). Writing off the likable 2016 distaff version, Jason Reitman, son of original director Ivan, is, apparently, making this “for the fans”.
Opens July 10th

Another one at the top of our most-anticipated list. Our own Barry Keoghan joins Dev Patel and Alicia Vikander in David Lowery’s retelling of Sir Gawain and the Green Knight. Lowery hasn’t made a bad film yet.
Expect late 2020

Phyllida Lloyd – of Mamma Mia! renown – directs Clare Dunne’s script concerning a woman who, frustrated by the Irish housing crisis, elects to build her own home. Selected to premiere at Sundance no less.
Expect late 2020

What a perfect title for a Charlie Kaufman film. The great pessimist directs Jesse Plemmons and Jessie Buckley in an adaptation of Ian Reid’s appropriately strange novel.
Expect late 2020

If you were any hotter than Lin-Manuel Miranda you’d be on actual fire. Jon M Chu’s adaptation of the Tony-winner that preceded Hamilton stars Anthony Ramos and Leslie Grace in a celebration of Washington Heights.
Opens June 26th

Don’t worry. It’s nothing to do with those frightful Universal remakes that The Mummy killed off a few years back. Elisabeth Moss stars in a take on the HG Wells tale that, thanks to a cracking trailer, is now “highly anticipated”.
Opens February 28th

Edgar Wright stumbled with the indulgent The World’s End, but was right back on form for Baby Driver. His latest is a spooky time-travel romance that takes us to London in the 1960s.
Opens September 18th

Joel Coen leaves Ethan at home to direct an adaptation of Shakespeare’s most cinematic tragedy. Denzel Washington and Frances McDormand are older Macbeths (if they won’t mind me saying so). Exciting.
Expect late 2020

Pencil this one in for next year’s Oscar season. David Fincher directs Gary Oldman in a study of Herman J Mankiewicz’s traumas while writing Citizen Kane. Tom Burke from The Souvenir is Orson Welles.
Expect late 2020

The Many Saints of Newark

This is The Sopranos origin story that you read about last year and then forgot all about. It is a real thing. Michael Gandolfini, son of James, plays Tony as a young man.
Opens September 25th

Apichatpong Weerasethakul, one of the world’s most celebrated art-house directors, moves into English with the study of a Scottish lady hearing voices. Tilda Swinton stars in a Cannes probable.
Expect autumn 2020

The Disney remake project continues. Unlike the slavish Lion King, their take on Mulan promises to vary dramatically from its source: no talking dragon, none of the original songs. We admire their courage.
Opens March 27th

Guillermo del Toro’s latest stars Cate Blanchett and Bradley Cooper in a remake of the chilling Tyrone Power flick about the rise and spectacularly grim fall of a con man.
Expect late 2020

No Time to Die

It seems like forever since we had a James Bond film. Cary Fukunaga directs Daniel Craig in what seems to be his last crack at the role. A “troubled
production”.
Opens April 3rd

Old muckers Sofia Coppola and Bill Murray are back together for a drama concerning a young mother dealing awkwardly with her playboy dad. Rashida Jones and Marlon Wayans are also on board.
Expect late 2020

More power to Pixar. Two releases this year and neither is a sequel. The first is set in a version of our own world where mythical beings such as elves and trolls proliferate. Can’t wait.
Opens March 6th

It’s finally here. Bong Joon-ho’s Palme d’Or winner – concerning a poor family’s efforts to infiltrate a bourgeois household – is among the most praised films of the decade. Deservedly so.
Opens February 7th

Armando Iannucci brings together a racially diverse cast for a rarer-than-you’d-think feature adaptation of Charles Dickens’s favourite among his own work. Tilda Swinton ideal as Betsy Trotwood.
Opens January 24th

All our favourite women in the same place. Josephine Decker, who made the brilliant Madeline’s Madeline, directs Elisabeth Moss in a flick about the divine writer Shirley Jackson. Pump it straight into our brains now! Cannes?
Expect in the autumn

Songs for While I’m Away

After winning an Emmy for The Farthest in 2017, Emer Reynolds moves on to a documentary concerning the late Phil Lynott. “Having been a huge Thin Lizzy fan throughout my life, it’s an incredible honour,” Reynolds says.
Expect mid-2020

The sequel to one of our favourite 2019 release, Joanna Hogg’s drama sends Honor Swinton Byrne onwards into the later 1980s. Should be ready for Cannes.
Expect late 2020

Well, you know what this is. Tom Cruise is back as a middle-aged version of the annoying cub who made aviator sunglasses unavoidable during the Reagan era. Will be big in China.
Opens July 17th

The True History of the Kelly Gang

Justin Kurzel’s take on the Peter Carey novel – featuring George MacKay as the eponymous bushranger – got great reviews at Toronto and then dropped from the conversation.
Opens February 28th

Oh, lighten up. Nobody objects when they stage another production of this indestructible show on Broadway or the West End. So, Steven Spielberg is allowed a go. Ansel Elgort is Tony.
Opens December 18th, 2020

Another holdover from last year’s list. The producers promise that Cathy Brady’s much-anticipated tale of border life will definitely be with us in 2020. Features a posthumous appearance by Nika McGuigan.
Expect summer or autumn 2020

Who do you fancy tackling the scary Roald Dahl story about a conference of witches? Robert Zemeckis sounds like he might be the man to direct. Anne Hathaway as the Grand High Witch? Well, that’s what you’ve got.
Opens October 9th

If it didn’t originate in the 1980s then it’s likely to be set there. Patty Jenkins, director of the hit first flick, is back on board for more feminist-lite romps. Should be grand.

Number of people with dementia to more than double by 2050 18:22
Ukraine to continue peace push with Russia despite deadly clash 18:22
Mark Walsh switches sides to take plum mount on Delta Work for Gold Cup 18:04
New virus about 20 times deadlier than regular flu 18:04
Q&A: How long could it take to form a new government after Election 2020? Could things get messy? 17:57