Harvey Weinstein: My pioneering work promoting women has been forgotten 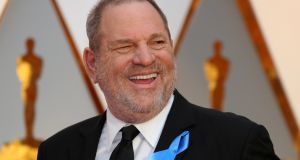 Harvey Weinstein: I made more movies directed by women and about women than any filmmaker, and I’m talking about 30 years ago. Photograph: Mike Blake/Reuters

Harvey Weinstein has complained he feels like “the forgotten man” and that his “pioneering” work championing movies directed by and about women has been “eviscerated” in the wake of multiple sexual assault allegations against him.

The film producer, once one of the most powerful men in Hollywood, has faced accusations of sexual assault and harassment from dozens of women.

Ahead of the start of his rape trial, Weinstein (67) gave an interview to the New York Post. He spoke while recuperating in hospital after spinal surgery and said he was doing the interview to prove he was not exaggerating the claims about his ill health. The former movie mogul appeared in court last week using a walking frame.

“I feel like the forgotten man,” Weinstein told the paper.

“I made more movies directed by women and about women than any filmmaker, and I’m talking about 30 years ago. I’m not talking about now when it’s vogue. I did it first. I pioneered it.”

“It all got eviscerated because of what happened,’’ Weinstein said. “My work has been forgotten.’’

Weinstein said he got Gwyneth Paltrow a pay deal of $10 million in 2003 for the movie View from the Top, which made her the highest-paid female actor in an independent film. Paltrow has accused him of harassment.

He also said his production company championed social causes including buying the distribution rights for the documentary Paris is Burning, about ballroom culture in New York City, and Transamericaa.

“I want this city to recognise who I was instead of what I’ve become,” he said.

Douglas H Wigdor, the lawyer representing three of Weinstein’s alleged victims, said it was not possible to feel sorry for Weinstein “while he sits perched in an executive private hospital suite and asks New Yorkers to recognise his prior accomplishments which justifiability have been overshadowed by his horrific actions”.

“Mr Weinstein’s latest public relations stunt on the eve of his criminal trial provides even more motivation to continue to prosecute the claims that will expose him for who he is.”

Weinstein is due to go on trial on 6 January on rape and sexual assault charges in a state court. He has pleaded not guilty to these charges, which relate to incidents alleged by two female accusers in 2006 and 2013. If convicted, he could face a life sentence.

Weinstein has also denied allegations by roughly 70 women of sexual misconduct dating back decades, saying any contact was consensual.

More than 30 women who were allegedly subjected to sexual misconduct by Weinstein have reportedly reached a $25 million settlement with him. – Guardian

This article was amended on Wednesday, December 18th, 2019, to correct a reference to the documentary Paris is Burning being about drag culture in the French capital, when if fact it is about ballroom culture in New York City

‘After Blackadder, for the first time in my life it was dead easy to get in the door’
8

The rise of the virtual book club
10