James Bond: No Time to Die – What we learned from first full trailer

The trailer for the 25th James Bond film, No Time to Die, the last starring Daniel Craig as 007, has been released. Video: Metro-Goldwyn-Mayer 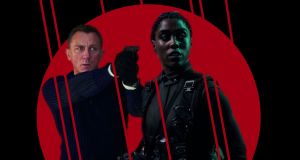 Daniel Craig and Lashana Lynch: the trailer hints that she may be the new 007. Photographs: MGM

Help, help! The world is in chaos. The United Kingdom is in a more advanced status of chaos than anywhere else. Some violent comfort food will help get them (and us) through the long winter.

The 25th Bond movie has had a rocky passage to date. There are still four months to go before No Time to Die hits cinemas, but the film could be forgiven for feeling as if were splayed on a bench with a laser heading towards its privates. They lost a director and script when Danny Boyle jumped ship. There have been injuries on set. The first press launch in Jamaica – at which no title was revealed – was seen as a damp squib. When the title was announced, it triggered more groans than grasps.

The good people at Universal and Eon can, thus, be forgiven for including all sorts of reassuring nods in the first full-length trailer. The stuff that comforted Britain after Suez is here to comfort Britain during Brexit. Decline in comfort.

We’ve barely kicked off before an Aston Martin blazes down an exotic thoroughfare. Shamelessly, Daniel Craig does actually get to utter the words with which Sean Connery introduced the character: “Bond, James Bond…”. The final shot of the promo sees our hero discharging a pistol in an unmistakable variation on the gun-barrel sequence that plays before every title sequence (though we probably won’t get nude ladies dancing on speedboats as the theme song plays).

Even the sly nods to woke readjustment are familiar. A leak had already suggested that Lashana Lynch, a black woman, was, perhaps briefly, to take over the “007” handle. We don’t get full confirmation of that, but Lynch, whose character is identified as some class of “00”, does get to say: “The world’s moved on Commander Bond.”

The world has indeed been moving on for Commander Bond since 1962. It is (good Lord!) over 30 years since Judi Dench’s M described him as “a sexist, misogynist dinosaur, a relic of the Cold War, whose boorish charm [is] wasted on me”. It wouldn’t be a Bond film without the publicity material bragging that 007 has been updated for a new generation. The current chatter has revolved around the arrival of Phoebe Waller-Bridge as a script doctor.

So, do we learn anything we didn’t already know? The opening dialogue suggests that the already familiar Madeline Swann – played sulkily by Léa Seydoux in Spectre – is suspected of betraying the good guys, but, whether reliably or not, the trailer works hard to dispel one popular theory. More than a few Bond veterans felt that Seydoux would be dispatched early on – maybe even during the pre-credit sequence – in the manner of previous sacrificial lambs such as Shirley Eaton in Goldfinger. If that is the case then the folk who cut the trailer have done a canny job of scattering the French actor through the action. Odds on her surviving to endure a racy pun in the closing ripple of silk sheets have shortened considerably.

As we all knew, Rami Malek, recent Oscar winner for Bohemian Rhapsody, is on board as the chief villain and it looks as if, defying one strand of anti-ableism, he is a disfigured maniac from the Phantom of the Opera Academy. “History isn’t kind to men who play God,” Bond tells Malek’s character. He should know. He’s immolated more of such folk in underwater bases and hollowed-out volcanoes than he’s drunk lethal Martinis. Christoph Waltz is back as Blofeld, but the clips suggest that, like certain incarnations of Hannibal Lecter, the old cat fancier is here only in an advisory capacity.

In short, there’s nothing to imply the 25th Bond film will be taking any vigorous swerves into the unfamiliar. The magic motorbike that defies gravity comes from the same family as the speedboats that disrupted weddings in Live and Let Die. The rising Ana de Armas (great in the current Knives Out) looks to be playing a variation on tough pro-active “Bond Girls” such as Barbara Bach in The Spy Who Loved Me.

Article 50 may get revoked. The UK may crash out of the EU without a deal. Jeremy Corbyn may persuade the Queen to live in a barge. But some things look set to remain as they always were.