Beanpole: remarkable look at the trauma of war

Review: Each sequence of the film set in postwar Russia brings fresh horror and new intrigue 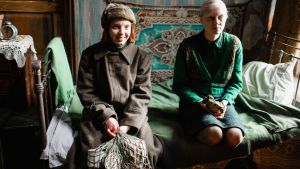 Kantemir Balagov’s extraordinary second feature opens with the rasping, popping sounds of Iya (Viktoria Miroshnichenko), a stringy, alabaster-skinned blonde suffering from momentary paralysis. Iya, a nurse in a city hospital for the war wounded, is suffering from post-concussion syndrome after fighting on the frontlines during the Siege of Leningrad.

She’s one of many traumatised characters in Beanpole, a free and imaginative adaptation of Svetlana Alexievich’s The Unwomanly Face of War.

The war may be over, but its effects are still powerfully felt. When Iya brings her adopted son Pashka (Timofey Glazkov) to the hospital where she works and the patients entertain him with animal noises, he doesn’t know how to respond when he is asked to bark like a dog. “Where would he have seen a dog?” someone asks. “They’ve all been eaten.”

When war hero Stepan (Konstantin Balakirev), who is paralysed from the neck down, asks after his children, his wife sounds relieved to inform him that only two of the three have died. Iya, meanwhile, accidentally suffocates Pashka during one of her fits just before the boy’s biological mother Masha (Vasilisa Perelygina), returns home from the military.

Masha’s insistence that Iya “owes her a life” coalesces into a bizarre forced surrogacy plot, as the women’s friendship becomes the most unhealthy female pairing since Rainer Werner Fassbinder’s The Bitter Tears of Petra von Kant. “Because I want to be the master,” sobs the softer and romantically obsessed Iya, as if to emphasise the point, when her motivations are questioned by a kindly doctor (Andrey Bykov).

The dynamic is complicated by Masha’s involvement with Sasha (Igor Shirokov), a sappy young man who loses his virginity to her, and by a general, unnerving sense that nothing and no one will ever be normal again. A scene in which Masha, at the suggestion of a neighbouring seamstress tries on a green dress sees her twirling coquettishly and then maniacally.

An impactful script, co-written by Balagov and Aleksandr Terekhov, is peppered with such indelible moments. There are repeated rallying cries to rebuild, but even the speakers of such sentiments sound deadened. Each sequence of the film springs a fresh horror and a new intrigue. And then, just when you think you’re up to speed, a visit to Sasha’s house throws the wildest curveball of all. Cinematographer Ksenia Sereda’s discombobulating use of close-ups and decentralised framing adds to the unease.

To date Beanpole, its two female leads, and its 28-year-old writer-director have deservedly hoovered up some 14 major awards including Best Film and Best Director at Un Certain Regard in Cannes. Expect than run to continue well into awards season.