Citizen K: Strange tale of the oligarch who turned on Putin 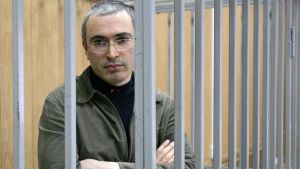 Gibney, working with editor Michael J Palmer and BBC archival footage, thrillingly relates the Wild West capitalism of the Yeltsin years, as predatory nascent capitalists – including Khodorovsky – swoop in to buy up the stock vouchers given out to every citizen. The vouchers were distributed so that Russians might have a personal stake in the state enterprises that were being dismantled. Ultimately, they ended up with the oligarchs.

This sickening spectacle is made worse by the subject’s gleeful account and his subsequent acquisition of a sizeable chunk of Siberia’s oil fields and a personal fortune estimated at $15 billion.

There are already gaps in his story: how exactly did he rustle up the money to start Russia’s first commercial bank? Not long into his tenure as an oil mogul, Vladimir Petukhov, an outspoken critic of the new oligarchs and the mayor of Nefteyugansk – the town where Khodorkovsky’s oil company, Yukos, was headquartered – was murdered.

It’s only when Khodorkovsky challenges Vladimir Putin’s authority that he finds himself convicted for tax evasion, money-laundering, and embezzlement.

Speaking with a perma-smirk on his face, Khodorkovsky insists that the years he spent in prison between 2005 and 2013 have made him a more thoughtful person. But it’s impossible to say if his dissident activities from London, where he now lives, are motivated by political consciousness or personal hate for Putin. (He doesn’t entirely deny the latter.) His movement, which he funds with his still vast personal fortune, feels awfully like many other anti-corruption banners in Europe: ideologically rudderless and ill-defined.

Against that, he’s a fascinating character, one who is ably supported by a great cast of talking heads, including journalist Tatyana Lysova, and former BBC journalist, Martin Sixsmith.

Gibney is equally fascinated by Putin’s journey from anonymous civil servant to strongman, and the broader political scene’s increasing resemblance to performance art. It makes for an arresting chronicle and many follow-up questions.