Clint Eastwood’s film tells a lie, but shows us the true Clint

In the film, a real-life female journalist sleeps with a source. There’s no evidence it happened 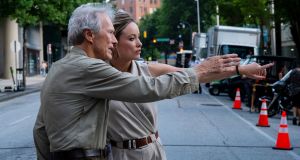 In Eastwood’s film, Richard Jewell, Kathy Scruggs, played by Olivia Wilde, has sex with an FBI source to get information. There is no evidence this happened.

Gerry Conlon and his father Giuseppe never shared the same prison cell. No armoured cars were used by the British forces who carried out the Bloody Sunday massacre in Croke Park. Des O’Malley never brandished a sword on the stairs of Leinster House.

Those are just three examples of close-to-home fictionalisations – or, if you prefer, untruths – about historical events in dramas (In the Name of the Father, Michael Collins and Charlie respectively) which claimed to be “based on a true story”. Filmmakers know, and most audiences implicitly accept, that some licence is usually required when dramatising real events.

Multiple protagonists will be conflated into a single character. Complexities will be elided in the service of a clearer narrative. Some dramatisations will take greater leaps than others, and some of those choices will be criticised. But if you want an accurate recitation of the facts, you’re better off with a good history book (though that too will include subjective interpretations).

The argument in favour of this process is that drama and fiction allow us to access greater, more profound truths than a slavish adherence to the facts ever can. But the question that then arises is whether it’s a good thing to claim your drama is rooted in true events, as so many do. That question is particularly relevant if the subject of the drama itself is suppression or corruption of the truth.

It’s no accident, surely, that the US culture war flashpoints of the 1990s – OJ Simpson, the Central Park Five, Monica Lewinsky – have provided the subjects for some of the most powerful dramas and podcasts of the Trump era. The latest such film, the Clint Eastwood-directed Richard Jewell, opens this weekend in the US and in January in Ireland.

The miscarriage-of-justice story tells how the FBI wrongly accused a local security guard of setting the pipe bomb which killed one person during the 1996 Olympic Games in Atlanta, and how the media destroyed his reputation before he had a chance to prove his innocence.

The controversy centres on the film’s depiction of Kathy Scruggs, a journalist with the Atlanta Journal-Constitution newspaper. In Eastwood’s version, Scruggs, played by Olivia Wilde, has sex with an FBI source to get the information she needs, with the tacit approval of her bosses at the paper. There is no evidence that this happened.

Scruggs died in 2001, but her former employers at the Journal-Constitution have hired feared Hollywood lawyer Marty Singer, who has demanded Warner Bros add a disclaimer along with a public statement.

Richard Jewell is partly based on The Suspect, a book written by Kent Alexander and Kevin Salwen, who issued a statement this week. “We have been asked repeatedly whether we found evidence that Scruggs traded sex for the story,” they said. “We did not. Though this exchange may be depicted differently in the movie, Richard Jewell, we urge everyone to see this excellent film which conveys the story of Jewell, the unsung hero, in a compelling, dramatic and entertaining manner.”

Asked for comment, Olivia Wilde said she thought it was unfortunate Scruggs “has been reduced to one inferred moment in the film. It’s a basic misunderstanding of feminism as pious sexlessness.”

Perhaps so, though Richard Brody in the New Yorker made a strong case to the contrary. “The scene suggests a gross failure of imagination on Eastwood’s part,” he wrote. “And, moreover, it suggests his gross contempt for the very idea of a female journalist, whose competence he depicts as inseparable from her sexuality – and, for that matter, from her promiscuity.”

Jewell, the eponymous subject of the story, died in 2007. It’s generally accepted that he was the subject of unfair treatment by the FBI and was badly smeared in the US media, from whom he ultimately received millions of dollars in damages. But the owners of the Atlanta Journal-Constitution refused to settle in a long-running case which it ultimately won, establishing new case law on the protection of sources. Scruggs did not live to see that verdict; her death at the age of 42 from a prescription drug overdose came after several years of being haunted by the Jewell case, according to friends and colleagues.

The words “true” and “truth” both appear on the poster for Richard Jewell. It seems at best ironic that a project which aims to redeem the reputation of someone who isn’t around to defend himself any more ends up trashing the reputation of someone else who is in the same position by tapping into a lazy stereotype about how women become successful.

Perhaps, inadvertently and hamfistedly, Eastwood has done us a service by revealing an additional and (to him) unexpected truth about how misogyny is embedded in our culture.