Uptake of HPV vaccine increasing for first time since controversy 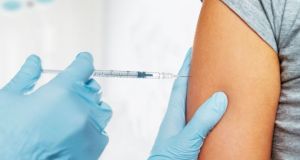 The percentage of teenage girls receiving the HPV vaccine in Cork and Kerry this year has risen to 50 per cent. Photograph: Getty Images

More teenage girls are receiving the cervical cancer vaccine for the first time since controversy erupted over its alleged side-effects.

The percentage of teenage girls receiving the HPV vaccine in Cork and Kerry this year has risen to 50 per cent, from 45 per cent last year, according to provisional figures from the Health Service Executive (HSE).

HSE officials greeted the new figures as encouraging, given the declining uptake for the Gardasil vaccine seen in recent years. “This is good news, though it’s far too early to say we’ve turned the corner,” said Dr Brenda Corcoran, head of the HSE national immunisation office.

“Although this information is provisional, and we remain very concerned at the current rates, it does tell us that more parents would seem to be hearing the message that this vaccine is safe and effective – it offers their daughters a life without cervical cancer.”

Speaking in Dublin, Robb Butler expressed concern at the steep decline in the uptake, which has dropped from 87 per cent nationally to 50 per cent last year.

“This is particularly alarming given Ireland boasted the world’s most successful HPV vaccination programmes globally, just a few years ago.”

Controversy over the vaccine has seen uptake rates in Denmark slump to 15 per cent, while in Japan the rate has gone from 70 per cent to 0.7 per cent, according to Dr Corcoran.

In contrast, Scotland’s vaccination rate has remained high, at over 85 per cent. Scottish officials told a HSE conference on Friday that as a result HPV infections have dropped 90 per cent.

The Regret (Reactions and Effects of Gardasil resulting in Extreme Trauma) group, claims to represent over 350 young Irish women who have developed long-term side effects after receiving the HPV vaccination. It claims recipients developed seizures, fatigue and joint pain after immunisation.

There are no studies to support claims the vaccine is responsible for chronic side-effects. Dr Corcoran said Gardasil is not the cause of any long-term conditions.