Ireland’s capacity to conduct clinical trials to be expanded 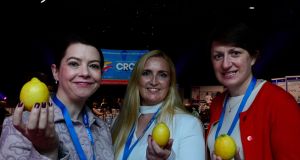 The scale of clinical research has improved dramatically in Ireland over the past five years, leading to better outcomes for patients and helping many avail of innovative treatments. But the health service needs to be better structured to facilitate trials and involve patients more to match achievements elsewhere in Europe, 200 delegates heard on Monday at a national seminar to mark International Clinical Trials Day 2017.

“Without such trials medical progress becomes a matter of chance,” said Prof Joe Eustace chair of the Health Research Bureau Clinical Research Coordination Ireland (HRB-CRCI) which acts as a co-ordinating centre for Ireland’s involvement in clinical trials. While there was a dramatic improvement in the scale of research, it was not yet sufficient for Ireland to become a world-class trial location, he said. In Denmark, which has a similar population to Ireland, it has five times the number of trials in train compared to the Republic.

“Clinical research not only save lives but enhances patients’ lives in the longer term as new products come into the market. Those countries that have embraced research as part of their national healthcare system have also witnessed better outcomes for their patients,” Prof Eustace added.

Since 2014, there has been a 37 per cent increase in the number of sites conducting clinical research in Ireland. In 2016 there were 15 hospitals and almost 300 clinical investigators working with clinical research facilities and centres around the country. Over the past number of years, more than 100 new clinical trials have opened in Ireland, delegates heard at the event, which was hosted by the HRB-CRCI in Dublin.

Investments in physical infrastructure, researchers and research networks had been the springboard to the recent upsurge in clinical trials activity in our health system, noted Dr Mairead O’Driscoll, interim HRB chief executive. Between now and 2020, it is planned to spend a further €54 million to maintain and expand Ireland’s capacity to conduct clinical trials and healthcare intervention studies, she added.

In practice, there was a need for all interested health professionals to have the capacity to test new innovative treatments, therapies and medical devices with their patients during their daily work, said Dr Pat O’Mahony chief executive of Molecular Medicine Ireland, a body set up by third-level institutions to help medical research yield benefits for patients. “It would mean greater and easier access for patients, and increased opportunities to collect research data… fundamentally increasing the clinical research scale we have in Ireland. Our ultimate aim should be that any patient who needs care, is suitable and has a desire to access novel treatments under development, could have the option to do so,” Dr O’Mahony added.

Clinical trials were especially important in paediatric research as so many diseases originated during pregnancy or in early childhood, according to Prof Geraldine Boylan, director of the Irish Centre for Fetal and Neonatal Translational Research based in Cork.

Young people were “protected from research” in the past, so much so very few drugs for children were developed. The reality is they cannot be treated as young adults and just given “a smaller dose”. Their make-up was different so they needed to be participants in research, including those at the earliest stages of life, to get the best possible outcomes. Where that involved a young baby, who was very ill at birth, or born prematurely, the whole family needed to be centrally involved, she said.

Prof Boylan outlined the circumstances of the birth of Tara-Lee to Norma and Jason Harte, who was born after a very difficult birth at Cork University Maternity Hospital, without a heartbeat having sustained a brain injury. She was treated in intensive care unit by cooling therapy where her core body temperature was brought down by several degrees over a 72-hour period. Now nearly 20 months old, Tara-Lee had benefited from a treatment which was developed by way of clinical research; her development since had been “absolutely perfect”.

Erin Dolan who lives in Lahinch, Co Clare, outlined how she participated in a clinical trial last year at University Hospital Galway during the months of her pregnancy as a consequence of having diabetes type 1 since she was 10. She had benefitted from continuous glucose monitoring, which accurately indicated her blood sugar level, and helped control high levels so it did not detrimentally affect her baby. While the trial required extra trips to hospital, “it was worth it as it benefited me and other women” in similar circumstances. Her daughter Maeve was born a normal, healthy baby, as a consequence.

For Ireland to be better recognised for its clinical research, where it can be done quickly and to the highest standard, Dr Mitchell said there was a need for clinicians in the health sector to be given “protected time” for their work, and for a central ethics committee to approve research rather than individual hospitals.