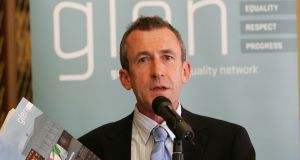 Kieran Rose, cofounder of the Gay and Lesbian Equality Network: while he paid for all outlay involved, he used Glen facilities and resources for a Seanad election campaign. Photograph: Frank Miller

Almost 30 years of fruitful campaigning for gay rights by the Gay and Lesbian Equality Network has come to a juddering halt with its decision to close following controversy over financial and governance issues.

The decision, taken just a month after the controversy flared up over the Easter weekend, is proof of the adage that reputations built up over years can be destroyed in minutes. In the words of consultant Jillian van Turnhout, Glen was caught in “a perfect storm” as funding dried up and staff left.

The writing was on the wall once its former executive director Áine Duggan went public last month with her concerns over financial management at the charity.

Returning from the US to her new post at Glen last October, Ms Duggan was immediately concerned at the corporate governance standards she found. She urged the board to be “upfront with the Charities Regulator about any possible past irregularities in governance, even where minor”.

The board agreed and the regulator was informed about a number of issues, including the use of Glen facilities and resources for a Seanad election campaign for co-founder Kieran Rose in 2016. Mr Rose, who had reimbursed the outlay involved, stood down as chairman, and Ms van Turnhout says the board had addressed the issue before she started her review.

Another issue was the personal use of Glen credit cards. Although the money involved was always reimbursed, this was poor practice, Ms van Turnhout found. In essence, a system that had evolved over time in a small organisation failed to pass muster in terms of 21st-century corporate governance.

In March, the board agreed to appoint an investigator to review complaints made by two staff members against another. The two staff members were both on extended leave from the start of this year; one has since left while the other returned to work in late April.

By then, the problems at Glen had leaked into the public domain and Ms Duggan had left. The organisation had no chief executive, funders were understandably hesitant about providing money to an organisation under the glare of media attention and the loss of staff over previous years left it suffering significant organisational memory loss.

In common with other bodies that benefited from the generosity of Chuck Feeney, the ending of support from Atlantic Philanthropies without the prospect of replacement funding further contributed to the “financial cliff” faced by Glen.

The sad end of Glen has many lessons for other charities: the importance of the highest standards of corporate governance, and the unpredictable and sometimes devastating focus of the media.

The question remains as to whether the fate it has suffered is proportional to the issues uncovered. There was no financial misappropriation, reports have found, and Glen insists it is under review, not “under investigation”, by the Charities Regulator.

Ms van Turnhout herself suggests the response to Glen’s troubles was “disproportionate”, but none of this will save the organisation from extinction.