New charity to support women with severe sickness during pregnancy 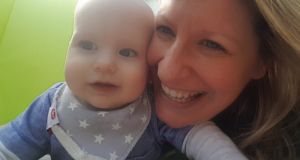 Karina Fee (37) from Rathfarnam in Dublin suffered from hyperemesis gravidarum from five weeks into her pregnancy until the birth of her son Noah, eight and a half months ago

A new charity to support Irish women who suffer from severe sickness during pregnancy has been launched.

Hyperemesis Ireland will offer peer to peer support to women who endure the severe pregnancy complication hyperemesis gravidarum (HG). The condition, also known as severe pregnancy sickness, affects about 1-2 per cent of pregnancies in Ireland.

While regular morning sickness is experienced by 80 per cent of pregnant women, approximately one in 100 ensure relentless and intense nausea and can be sick multiple times every day. Dehydration can develop rapidly and women are at risk of further complications such as malnutrition and vitamin deficiencies.

Karina Fee (37) from Rathfarnam in Dublin suffered from HG from five weeks into her pregnancy until the birth of her son Noah, eight and a half months ago.

Ms Fee was forced to begin her maternity leave when she was six months pregnant and lost a significant amount of weight.

“I was just vomiting all day, most days. As the pregnancy progressed, the sickness got worse,” she said.

“I was hospitalised three times throughout the pregnancy for hydration. I was attending Holles Street so I would be in for two or three days. They just hooked me up to IV and I’d have five, six or seven bags depending on how bad I was.”

Ms Fee said because the condition was so bad, it has delayed her plans to have a second baby.

“It was upsetting because I really wasn’t expecting to be so ill throughout. I just wanted to be able to enjoy it and I just didn’t get to.

HG came to prominence in 2014 when the Duchess of Cambridge Kate Middleton was admitted to hospital in London with the condition during her first pregnancy with Prince George.

Caitlin Dean, chairwoman of the UK Pregnancy Sickness Support has been providing support to women in Ireland for several years and helped establish Hyperemesis Ireland.

“It is an exciting time for hypermesis sufferers in Ireland as care and treatments are improving rapidly thanks to interested professionals and national guidelines,” Ms Dean said.

“By creating a support network with volunteers across the country, the suffering of women affected by this awful condition will be drastically reduced. We have seen huge improvements in pregnancy outcomes thanks to our work in the UK and now women in Ireland will benefit from the same model of support we have found so successful.”

Professor Brian Cleary, pharmacist at the Rotunda Hospital and a trustee of Hyperemesis Ireland said: “The impact of hyperemesis on a woman and her family can be extreme. Hyperemesis Ireland will help raise awareness and advocate for women to ensure that they receive the best possible care and support.

“In 15 years working in the Irish maternity services, I have seen first-hand the severe impact of hyperemesis and the drastic need for access to support and information on safe and effective treatment options.”