Two-thirds of men in Ireland are overweight or obese, report finds 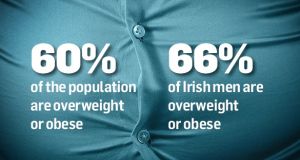 Two out of every three adult males in Ireland are overweight or obese.

Some 66 per cent of men in Ireland are overweight or obese, according to a new report from the Department of Health.

This figure is down slightly from 70 per cent reported two years ago.

The statistics were compiled from a survey undertaken by the Department of Health which show the situation is worse for older men, who are more likely to be overweight or obese.

A representative sample of 7,413 people aged 15 and older living in Ireland were interviewed between September 2018 and September 2019 for the research.

The results show only 34 per cent of men aged between 25 and 34 have a normal weight, compared to 47 per cent of women.

Overall just over a third of Irish adults, some 37 per cent are of normal weight, in 2019, the survey said. Half of those surveyed were achieving the recommended level of physical activity.

This year’s survey included sleep and sun protection as new areas of study.

According to Minister of State with Responsibility for Health Promotion Catherine Byrne the levels of overweight and obesity in the general population “remains a great cause for concern”.

“There is no room for complacency” she said. “In recent years Government has introduced evidence-based policies and a range of initiatives and actions to tackle both obesity and physical inactivity, and implementation of these remains a priority. This year’s survey shows a small increase in the number of people meeting the guidelines on physical activity, which is encouraging,” she said.

The Healthy Ireland Survey adds to the data collected in the previous surveys published from 2015 - 2017 provided researchers with an up-to-date picture of the health of the nation and reports on many lifestyle behaviours.