Status yellow warning in place for Kilkenny, Wexford and Cork 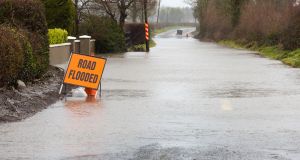 Met Éireann says there is a possibility of flash flooding in affected areas. Photograph: iStock

Very heavy rain is forecast for parts of Tipperary and Waterford with an orange warning in place for the both counties.

Accumulations of more than 50mm (two inches) are expected in both counties from 3pm on Wednesday afternoon until Thursday evening at 6pm.

A status yellow weather warning is in place for the neighbouring counties of Kilkenny, Wexford and Cork for the same timeframe with accumulations of between 25mm and 50mm expected.

Met Éireann forecaster Liz Walsh said the heavy rain is being caused by a southeasterly air flow which normally results in wet weather on southern and eastern coasts.

She said one particular pulse of rain will be dwelling over Waterford and south Tipperary which will feed in heavy showers over a prolonged period.

A status orange warning is the second highest level of Met Éireann warning. It is described as “infrequent and dangerous weather conditions which may pose a threat to life and property”.

Ms Walsh said the very heavy rain will be localised. Fortunately rainfall in the area has been below average for the month so there is not a threat of rivers in the area bursting their banks.

However, there is a possibility of flash flooding in affected areas.