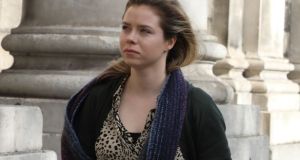 Aoife Bennett from Naas, Co Kildare, took a case against the Minister for Health, the HSE, and GlaxoSmithKline Biologicals, as well as the Health Products Regulatory Authority. File photograph: Collins Courts

The woman at the centre of the swine flu vaccine case has told of her shock at the “adversarial” nature of the court case which lasted 21 days.

The State is facing legal and other costs estimated at up to €4 million following the settlement of a case taken by Aoife Bennet who developed narcolepsy after being administered with a swine flu vaccine.

Ms Bennett (26), who was administered with the Pandemrix vaccine in school in December 2009, as part of the State campaign against the swine flu pandemic, changed within weeks from being an energetic, athletic teenager to someone who struggled to get out of bed, her mother Mary told the High Court in October.

Ms Bennet, from Naas, Co Kildare, took a case against the Minister for Health, the HSE, and GlaxoSmithKline Biologicals, as well as the Health Products Regulatory Authority.

However, the case has now been settled, with no admission of liability for an undisclosed sum. It is unclear what will now happen with the other 100 or so people, mostly young, who also believe they developed narcolepsy as a result of the vaccine.

Most other countries have a no-fault compensation schemes for people who suffer injury arising from vaccination, but Ireland does not despite a scheme being recommended by an Oireachtas committee as far back as 2001.

On Wednesday, Ms Bennett said it had been very tough watching her parents being cross-examined before she gave her evidence.

“We weren’t expecting the level of cross-examination, our legal team thought they would take it easy on me, but that wasn’t the case, it was very adversarial.”

She told RTÉ’s Sean O’Rourke show that she had been shocked when her mother was questioned, but because of her condition had been drowsy when her father was in the witness box. Having her parents go first did prepare her in a way, she said.

“But it was tougher watching them being questioned. I wanted to stand up to add in, to help.”

Ms Bennett said she was satisfied with the outcome as she had not known what to expect. “I just wanted enough support to live my life.”

She added that she hoped other families will not have to go through what she did in court. “It was very draining, I had to put my life on hold. No fault compensation would be a good thing.

“I don’t know why the Minister for Health has let it go on so long or why the Department of Health let it go to the courts.”

Meanwhile, the State has “totally mismanaged” the issue of children who claim to suffer from narcolepsy after being vaccinated for swine flu, according to the father of one such patient.

Tadhg Kennedy, father of 16-year-old Jack, told RTÉ radio’s Morning Ireland that his son was vaccinated, along with his siblings, on the same day as Ms Bennet in December 2009.

Mr Kennedy said his son has to take regular naps, suffers from hallucinations and is now “a heavily medicated young man. That’s the rest of his life.”

The vaccination had “a devastating effect on some people” and the response of the State was “totally mismanaged when adverse effects were reported.”

He said he had listened with great interest to Ms Bennet’s case and the opening statement in court that the drug had not been properly clinically trialed.

The State had “reluctantly and grudgingly” given any supports to those who suffered adverse effects. “It’s just a mess, it was totally mismanaged. Somebody has to stand up and fix it.”

Mr Kennedy pointed out that the State has spent millions “aggressively fighting” cases like that of Ms Bennet and his son (whose case is pending). “It’s just bonkers.”

The drugs company had settled similar cases in other countries, he said and asked why the case was being contested so aggressively in Ireland, especially when it was obvious that “something has gone wrong and people are suffering this trauma.”

He said he understood the need for vaccination and the concept of herd immunity, but when something goes wrong, as it did in this case, “it is up to the State to take care of it.”

Mr Kennedy also queried why a no-fault compensation scheme for people who suffer injury arising from vaccination, has not yet been implemented despite a scheme being recommended by an Oireachtas committee as far back as 2001.

Even if such a scheme were to be introduced “it’s too late for us,” he said.