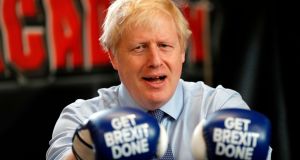 Loyalist paramilitaries could attack ports in Northern Ireland and Britain over Boris Johnson’s Brexit deal putting a border in the Irish Sea, the head of the UK’s largest trade union has warned.

Len McCluskey, general secretary of Unite, described the plan to create a customs and regulatory border in the Irish Sea to avoid a hard border on the island of Ireland as “unbelievably dangerous”.

“Have we got to wait for people to be blown up and killed? Whether these ports are in Stranraer or Pembroke or in Holyhead, or the areas in Northern Ireland where there are going to be checks?” he said.

“Do the media not understand that loyalist paramilitary groups are meeting almost on a daily basis in Northern Ireland? It is incredibly reckless and dangerous.”

Northern Ireland’s Democratic Unionist Party has criticised the proposed deal, saying it would put a legal, customs and economic border down the Irish Sea. Loyalists have objected to the deal on the basis that it would create an “economic united Ireland” and called the Brexit deal “the Betrayal Act”.

Loyalists have been holding regular public meetings in Northern Ireland to raise objections to the EU-UK deal since it was agreed in the middle of last month. The Police Service of Northern Ireland has said the Brexit deal could lead to “civil disorder” in loyalist areas.

Mr McCluskey, a key ally of the Labour Party, made his remarks in an interview with the New Statesman. The trade union leader called on voters to back Labour in the UK’s general election on December 12th if they wanted a second vote on the Brexit referendum.

He raised concerns about the Brexit deal, saying Mr Johnson was “a little bit like a second-hand car salesman . . . [who] didn’t want us to look under the bonnet of his deal to see what the engine was like.”

“Now there will be lots of ordinary people who are concerned about other things and don’t see Ireland as a priority for them,” he said.

“But it will be a priority when that violence is brought into the rest of Britain. It’s dangerous, unbelievably dangerous, and we have to call it out.”