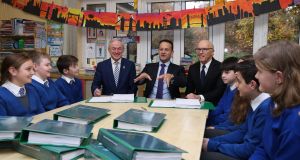 Half the Cabinet decamped to Wicklow on Tuesday for a trumpet recital.

A lot of planning went into the gig.

The Taoiseach and a stellar assortment of junior and senior Ministers blew their enormous trumpets for all they were worth, on a mission to make the right sort of noise for maximum pick-up and greatest return.

Their vigorous stylings were performed before an appreciative cast of excited primary schoolchildren whose critical faculties have yet to fully develop.

The blowing of the political trumpets was preceded by a carefully staged set-piece event: the ceremonial signing of the contract for the National Broadband Plan, which was presented for the official inking in a hefty, smartly branded, lever-arch file. This performance was executed in the presence of more children, who provided the necessary photographic ballast.

A great start to the week for Leo and his chums.

What could possibly go wrong?

They all trooped back to Dublin and the Dáil, chuffed with themselves – until realisation dawned that for all their showy blowing in Wicklow, their efforts had been upstaged by a more entertaining Fine Gael variety act. Newcomer Verona Murphy was giving it socks next door in Wexford, stealing their thunder, and didn’t so much take the gloss off their fancy broadband announcement as ditch it in the gutter.

The only person who could have possibly made a better job of ruining their meticulously planned PR jaunt is the Duke of York.

Murphy, the Fine Gael candidate in the Wexford byelection, has been shooting her mouth off to great effect over the past few days – first on RTÉ radio, then to The Irish Times, and most recently to her local newspaper the Wexford People. Her views on migrants, homelessness, drink-driving and road safety have been joyously received by her political opponents and headline writers.

Back in Leinster House, at the first session of the week, almost an hour passed in the chamber before the trumpeters, freshly returned from their show in Glendalough, heard a mention of broadband. And that was when most TDs had left the chamber and, even then, the Minister for Communications had to broach the signing of the new contract because nobody asked him about it.

Not even an angry question knocking their humongously expensive project. Nothing. Everyone was far too busy concentrating on what Verona said. The spokeswoman for the haulage industry drove her party into a heap of controversy, much to the disgust of the Fine Gael top brass.

Her comments overshadowed their big launch.

Earlier in the day the Taoiseach tried to minimise the situation by explaining Verona’s persona. She is outspoken and independent and “not going to be the kind of person who toes the party line”. So he is sticking by his candidate, even if she is all over the place like a skidding Scania. And anyway, it’s too late for a deselection.

Speaking of which, the newly deselected candidate for Dún Laoghaire, Maria Bailey, attended leaders’ questions, taking her usual seat in the chamber. A signal, perhaps, that she might not be prepared to abandon her general election hopes just yet.

The Fianna Fáil leader was grateful to call upon one of Verona’s quotes to embarrass the Taoiseach just a little more. This was in the course of a rather aggressive Leaders’ Questions session between the two men, with Micheál Martin appearing genuinely angry as he attacked Leo Varadkar’s housing policy.

He accused the Government of inertia and a lack of urgency in dealing with “rising homelessness, rising rents, young people unable to afford housing and a chronic shortage of social housing”.

He based his attack on a story in the Irish Independent that quoted a “senior Government source” attacking local councils for the lack of progress in building houses and proposals to curb their authority.

The Taoiseach said he didn’t know of any such proposals. Instead, he said the Government was going great guns in providing housing.

The Fianna Fáil leader couldn’t believe the Taoiseach was “disowning” a newspaper briefing from an anonymous source and called on him to “formally disown” it in the House.

“I didn’t write it – I can hardly disown it,” chuckled Leo.

“It’s classic, the way you guys operate,” shrugged Micheál. “You were in Cork last week with the hard hat, with the vest and four of ye with shovels.”

“I was in Cork at the weekend, and now you’re irritated,” niggled a smiling Leo.

Margaret Murphy O’Mahony of Fianna Fáil and Cork bridled. “They knocked on no doors. Knock on the doors, Taoiseach!”

“They might believe your candidate, Verona Murphy, actually,” he mused, supposedly as an afterthought. She says his Minister for Housing has a “Let them eat cake” attitude. “That’s her words.”

Micheál seemed very angry with the Taoiseach. “You’ve no sense, you’ve no feel for how people are suffering out there because of the lack of housing in this country.”

His backbenchers looked most impressed.

The “usual display of outrage and faux anger”, sniffed Leo, dismissively. And yes, he was in Cork at the weekend. He turned the sod on a new housing development.

“Did you knock on any doors?” demanded Murphy O’Mahony.

Why yes. “I met lots of people; I was in Blackpool shopping centre, I was in Blarney, too. I got a very good reception and the deputy is clearly irritated about that,” he replied, looking pointedly at Martin.

The Fianna Fáilers protested. He’d know all about Blarney, they harrumphed.

You’d never think the two parties are operating a confidence-and-supply agreement, with one propping up the other in power.

The Taoiseach lacerated his opposite number for “the absolutely paper-thin nonsensical housing policies” he put forward at the weekend’s Ógra Fianna Fáil conference.

“Anyone who thinks this man or that party has any alternative when it comes to housing really must see through it at this stage.”

The Ceann Comhairle broke through the indignant howls. “I suppose it would be a futile request on my part to ask deputies to leave the campaigning outside the chamber.”

Not if he had Verona with him.