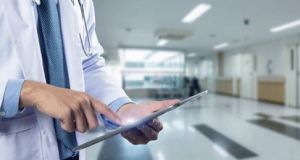 The Rotunda Hospital says about 2,400 patients at the hospital opted for private care annually, and this generated accommodation income from insured patients of over €11m annually over recent years

The State will have to double or triple salary levels to remain competitive in recruiting leading obstetricians if it removes private practice from public hospitals, the Rotunda Hospital has said.

The Rotunda said the real, unavoidable and pragmatic effect of eliminating private practice income was that consultant posts at the hospital would become less attractive, and alternative positions, including those overseas, would become more attractive. “Quite simply this will directly affect the quality of doctors that we can attract or retain to deliver a world class maternity service”.

The Rotunda Hospital made its comments in a submission to a Government-appointed review group which is examining the implications of separating private care from public hospitals as recommended under the Sláintecare health reform programme.

“If private practice ceases in public hospitals this will have an adverse impact in both recruiting new consultants and in retaining existing consultants. Public hospital salaries for consultants in Ireland are significantly lower than comparable salaries in the US, Australia and the UK, which have traditionally recruited large numbers of the best -qualified Irish doctors.

“These doctors had traditionally been attracted to the Irish public hospital posts because of the ability to supplement income with private practice. The removal of this additional income will seriously undermine recruitment and retention of consultants.”

It said there were no private hospital facilities in Ireland providing maternity care – following the closure of Mount Carmel a number of years ago – and given the highly litigious nature of this speciality it was unlikely that any would open in the country in the foreseeable future.

The Rotunda said maternity hospitals were unique in that women chose whether to seek public or private care many months ahead of their admission.

It said about 2,400 patients annually at the Rotunda opted for private care, and this generated accommodation income from insured patients of over €11 million annually over recent years – about 20 per cent of its overall budget.

“This income is a valuable source of funds ,enabling the hospital to provide added resources, equipment and physical infrastructure in order to provide a safe quality service for all patients.”

The Rotunda said the provision of private practice in public hospitals was safer for this group of patients as they had access to a higher standard of neonatal intensive care which was not available in private hospitals. It said patients also had access to a greater number of sub-specialities and specialisation of services such as pathology and radiology.

It said the withdrawal of private practice would almost certainly put too much of a strain on the public system as patients may need to be transferred back for intensive care and more specialised care which cannot be provided in private hospitals.