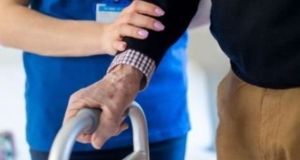 Nursing homes have endured the worst of the coronavirus pandemic with residents of care facilities accounting for more than half of almost 1,900 deaths from Covid-19 in the State. Photograph: Getty

Family members of residents of a nursing home affected by a severe coronavirus outbreak were not given the opportunity to be with their relatives when they were dying, a watchdog has said.

Health service regulator, the Health and Information Quality Authority (Hiqa), said that Dealgan House in Dundalk, Co Louth – where there were 22 deaths related to Covid-19 – had not ensured procedures were in place during the outbreak to keep relatives informed of a resident’s condition.

Their grief was “further compounded” by the way in which the resident’s personal belongings were returned to them in black plastic bags and boxes, relatives told Hiqa inspectors.

The nursing home said that the handover of belongings in bags and boxes was in line with infection prevent and control guidance, but bereaved families reported to inspectors “how this insensitive arrangement added to their grief at what was already a very difficult time.”

A report into inspections carried out at Dealgan House after the outbreak at the end of May – when there were 59 surviving residents living in the privately owned nursing home – is one of 31 reports published by Hiqa into inspections of resident care centres for older people.

The inspections, carried out between May and September, cover Covid-19 outbreaks, the preparedness of the care facilities for outbreaks of the virus and and the deaths of residents.

Six reports relate to inspections carried out at facilities run by the HSE.

Hiqa reported that two HSE care facilities, Macroom and Midleton Community Hospitals, had significant issues with inadequate and institutional premises and that this not only affected the residents’ rights to privacy, dignity and respect but put them at risk of infection.

Inspectors said that insufficient progress had been made at Midleton in “improving the quality of life” for six residents living in a large multi-occupancy room and seven living in another.

Nursing homes have endured the worst of the coronavirus pandemic with residents of care facilities accounting for more than half of almost 1,900 deaths from Covid-19 in the State.

Dealgan House was one of 13 nursing homes and care facilities found not to have been in compliance with national standards and regulations on caring for people.

Another nursing home, TLC Citywest in west Dublin, was inspected unannounced on July 23rd when it was experiencing a significant Covid-19 outbreak that was ongoing from April 19th.

Although the centre had no positive cases at the time of the inspection, the outbreak was not declared over by health officials. An outbreak is not closed until 28 days without a positive case.

An inspection was carried out at Loughshinny Residential Home in Skerries, Co Dublin where Hiqa said there were two successive outbreaks of Covid-19 between April and July.

“The first outbreak saw staff and residents becoming unwell with the virus and the death of more than 15 residents during this period, although not all of these deaths had a confirmed Covid-19 diagnosis and some had died from natural causes,” says the Hiqa inspection report.

Loughshinny was found to be fully compliant with all 16 of the regulations inspected and that the nursing home had planned and prepared for Covid-19 from early on in the year. The home, owned by the Bartra Healthcare group, was able to ensure safe staff levels through the outbreaks.

In the report on TLC Citywest, Hiqa said the chief inspector received 14 items of unsolicited information in 2019 about insufficient staffing, restricted visiting and management of falls.

Hiqa found that there was a high rate of falls at the nursing home; from March to May 2020 there were 209 falls.

The regulator found “gaps in practice in the cleaning and decontamination of blood glucose monitoring equipment and dressing trays,” chairs in the staff changing area were torn and could not be cleaned effectively and the storage of residents’s clothes were not optimal.

The nursing home was found not have the number and skill mix of staff to ensure the social needs of the residents could be met.

One resident was confined and her most recent activity was a hand massage 17 days previously. Another resident confined to a wheelchair had a walk in the garden the day before the inspection and a hand massage 16 days prior to this.

Hiqa carried out a “risk inspection” at Dealgan House in Dundalk in response to concerns raised with the regulator’s chief inspector from April 3rd and the high number of deaths that occurred there.

The chief inspector was advised of an outbreak on April 7th. That month, more than 60 per cent of all staff, including 70 per cent of the nursing staff, could not work after contracting Covid-19.

“The centre experienced significant delays in accessing test results for residents and staff, which meant that the staffing shortages were further compounded by a number of staff unable to return to work until their test results came back,” Hiqa said in the report.

“In addition, the senior management team was also significantly impacted by Covid-19 and therefore unable to work and oversee the care and services in the designated centre.

The nursing home was found not to be compliant with seven regulations, including infection control. Staff were found not to have followed all public health advice.

Inspectors observed staff arriving at work already with their uniforms on and not adhering to social distancing when having their temperatures checked, the regulator’s report says.

“Not all staff checked their temperatures on arrival for work and again during the working day in line with HPSC [Health Protection Surveillance Centre] guidance,” the report states.

The inspectors said that residents at Dealgan House were “reluctant to talk about the Covid-19 outbreak but some residents did express an understanding that something awful had happened in their home and that some of their friends and neighbours had sadly died as a result.”

The Hiqa report said that the prolonged period of “cocooning” had negatively affected the wellbeing of residents and had increased their anxieties.

One resident told inspectors that they were “sick of looking at the same wall for more than eight weeks.”

The families of residents who died in Dealgan House said they were “shocked and saddened” at the findings of the report.

They said in a statement that they were surprised to read that the Hiqa inspectors had to put “an immediate action plan” in place on the first day of their inspection because they were “not assured that residents were being monitored twice daily in order to detect signs and symptoms of potential Covid-19 infections early”.

The families said that the report “galvanises our calls” for a public inquiry into the Co Louth nursing home.

“It is clear that this report will only add to the questions that we have about what exactly happened to our loved ones,” they said.

Dealgan House said that the nursing home, the first to be inspected by Hiqa during Covid, was re-inspected on September 8th and that it is awaiting the final report.

The nursing home’s director Eoin Farrelly said the report “highlighted some areas that needed attention and the nursing home attended these issues immediately, so much so, that in the follow-up inspection all residential care-related regulations were deemed compliant”.

Dealgan House said that it continued to “take all possible steps to protect our residents and staff during the current surge of infections”.