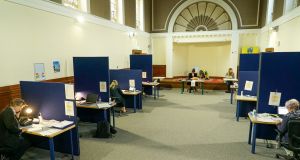 Too many daily cases, too many contacts, not enough contact tracers.

This is what the problem boils down and why the HSE had to skip calling between 2,000 and 2,500 newly infected Covid-19 cases to chase down their close contacts.

Quickly calling people who test positive for the coronavirus disease and getting their close contacts, and getting those people in turn isolated and tested, is a key part of fighting the virus.

The HSE’s unprecedented decision to send a second text message to the 2,000 to 2,500 cases from last weekend to ask them to tell their close contacts to call their GPs immediately and to arrange tests shows how the tracing system has become swamped by a surge in cases. The first text, sent over the weekend, told them they had tested positive. The second will be sent today.

Three days in all were affected: Friday, Saturday and Sunday. There were about 3,600 cases in all over the three days but the HSE sifted out the elderly and the school children to be contacted directly (via parents in the case of school children), reducing the number to 2,000 to 2,500.

People have, on average, about five close contacts so that would normally leave between 10,000 and 12,500 people but directly contacting school children, who have higher numbers of contacts on average, means that the HSE estimates it is skipping calls to about 8,000 close contacts.

By relying on most of last weekend’s positive cases to alert their own close contacts, the health service has effectively outsourced the work of contact tracers to the infected themselves.

This is how strained the system has become and the scale of crisis management measures being taken in response to a virus that is out of control in the community.

Until this recent surge in cases, contact tracers were not even allowed, under data protection rules protecting a person’s privacy, to tell close contacts who they might have been infected by.

Now the HSE is telling the infected to inform their close contacts themselves. It is extraordinary to expect the positive cases themselves, some of whom are sick with the disease, to take on this responsibility, even though some close contacts may already know as family members.

The State’s chief medical officer Dr Tony Holohan said on Tuesday night that the HSE was “continuing to contact trace as much as it possibly can” but the exponential spread had made this process a “huge challenge”. He even went so far as to say that, under Level 5 restrictions, many people are in effect being asked to behave as if they are close contacts and to stay at home.

Those in charge of contact tracing felt they had no choice but to skip contact tracing on up to 2,500 cases. If they did not take this action, the backlog would have grown and a backlog is hard to clear when a case load remains so high every day. It risked the entire tracing system.

The problem has arisen because the system could not keep up with the number of cases coming in with a staff of 400 people. The case load they were having to deal with jumped from 500 to 1,000 on October 7th and 8th and has averaged around 1,200 a day over recent days.

Given that Level 3 restrictions did not work to reduce social contacts between people, contact tracers were having to make up to 10,000 calls on some recent days to track down close contacts. This would have required almost three times the number of contact tracers to manage. Still, it is hard to understand why the HSE did not staff up more substantially during the summer lull when daily cases fell to single figures some days.

To put it in perspective, on the busiest day in the early stages of the pandemic, there were 5,250 calls made by contact tracers to infected cases and close contacts. It is clear we are in the midst of the second wave.

In response, the HSE is having to change quickly how tracing works.

From today, people will receive a text as soon as they are identified as a close contact of a Covid-19 cases in order to get them tested and isolating as quickly as possible. Call protocols are changing so newly infected cases will receive just one call instead of two to discuss their infection and to capture their contacts. The number of new tracers being hired is doubling to 1,000.

Given the likely yo-yo effect of moving in and out lockdowns, planning has started for when the Level 5 restrictions are lifted in December and how contact tracing might keep case numbers down from then.

There is even talk among health officials about how to manage a third wave.