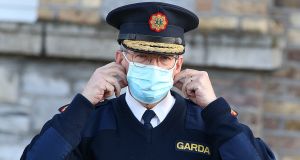 There was no “heavy handedness” in the Garda’s response to far right, anti-lockdown protestors in central Dublin on Thursday and gardaí would not allow protestors to “stampede” down the city’s main streets, Garda Commissioner Drew Harris has said.

He added the far right in Ireland had switched from open source communication with each other – such as social media – to more covert means when organising protests. Intelligence gathered by gardaí showed they planned to try to disrupt key State institutions and infrastructure.

He said the Irish groups believed in the great replacement theory – a conspiracy suggesting predominantly white populations were being deliberately replaced with people from other ethnic groups by mass migration - which had become very popular with far right groups in America.

However, the Irish groups remained small and were under observation and investigation by gardaí.

Mr Harris was speaking at Garda Headquarters, Phoenix Park, Dublin, where he addressed the media about the policing plan for the next six-week period as the Republic will remain on Level 5 of the Living with Covid-19 plan.

He was also speaking a day after 11 people were arrested after far right anti-lockdown protestors and gardaí clashed on Grafton Street.

Trouble flared when a group tried to occupy the street, the main shopping thoroughfare in the capital. A large rally had been planned for Custom House Quay, though both the Yellow Vest group and Health Ireland group decided to withdraw from the gathering. However, another group later proceeded to Grafton Street where the clashes took place.

Gardaí took up position in numbers on Grafton Street to prevent the protestors occupying the area for a sit-down protest against public health measures to combat the spread of Covid-19. A similar protest took place on the street earlier this month, with no social distancing and by protestors who were not wearing masks.

Commenting on the general policing plan for Covid-19 Level 5, Mr Harris said traffic volumes had already begun to reduce as a network of thousands of Garda checkpoints had been erected nationwide; some static and others mobile.

He added the additional enforcement powers, and additional sanctions being introduced by the Government for those who breached Covid-19 regulations, would be helpful to the force.

However, the Garda would still see engagement with people as its main approach during the pandemic and did “not want to get to the point of enforcement” actions being taken against members of the public.

When it was put to Mr Harris that he had previously said he did not want any more powers for the Garda, believed the force did not need them and appeared to be reluctant about the new powers being introduced, he said he was a “faithful public servant” and would do “as I’m told”.

He added the new powers would only ever be a last resort and that enforcement powers available to the Garda earlier in the pandemic were very rarely used.