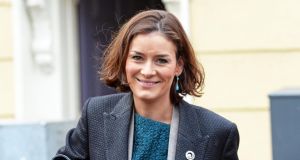 Proposals to legalise medicinal cannabis are “madness” and “verging on the immoral”, the Oireachtas Joint Committee on Health has been told by the Fine Gael TD Kate O’Connell.

Ms O’Connell, a practising pharmacist in Dublin, said the proposals would undermine existing regulations that are designed to protect the public.

She was responding to the People before Profit TD Gino Kenny, who said his Cannabis for Medicinal Use Regulation Bill would save lives by reducing overdoses from other drugs.

Ms O’Connell said the arguments for legalisation rested on “fake facts”, anecdote and hearsay, separate from scientific evidence about the effectiveness and safety of cannabis.

“I see this Bill as undermining the current regulatory framework we have with the Health [Products] Regulatory Authority and the Pharmaceutical Society of Ireland, who are internationally recognised as the competent authorities,” she told the committee.

She pointed out that a recent report from the authority found a complete lack of clinical and scientific evidence for medicinal cannabis and patients could already obtain a cannabis product provided that a competent, qualified hospital consultant judges that it is needed.

Ms O’Connell asked what would happen if a person with epilepsy had a fit after taking medicinal cannabis and then crashed a car. “On whose hands is that?”

She added that after speaking against the Bill at a previous meeting she had endured “10 days of vile abuse” online.

The Bill is clear that it would be an offence to use cannabis for any reason other than medicinal use, he said.

Mr Kenny told the meeting, which was held to scrutinise the proposed legislation, the legalisation of medicinal cannabis would save lives by reducing fatal overdoses from more dangerous drugs.

“Increased numbers of patients using cannabis-based products instead of more toxic alternative authorised medicines will result in a net improvement in the health of the population as a whole,” he said.

“This is borne out in the US, where increased use of cannabis for medicinal use has coincided with falling sales and use of more toxic drugs and with a consequent fall in drug overdoses, including fatal overdoses. No overall increase in recreational use has been associated with the legalisation of cannabis for medicinal use in the US, and youth cannabis use for recreational purposes is actually falling there.”

Mr Kenny said that his Bill was about “trying to alleviate unnecessary suffering” and that his efforts are driven by the personal testimony of many people who have used cannabis products “in circumstances not of their own choosing”.

The Bill takes a health-led approach that stresses the effectiveness and greater safety of cannabis-based products over authorised medicines such as opioids and benzodiazepines, which cause serious withdrawal symptoms, addiction and fatal overdoses, he said.