Concern over 50% jump in gonorrhoea cases 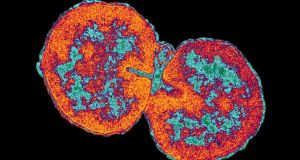 Disease experts have expressed concern about a 50 per cent jump in cases of gonorrhoea last year.

Overall the number of sexually transmitted infections grew by 10 per cent in 2016, according to the HSE’s Health Protection Surveillance Centre.

HIV cases were up 6 per cent and infectious syphilis by 20 per cent, according to preliminary data.

Almost three-quarters of all STIs were among under-30s. Young people aged 15 to 24 accounted for almost half of chlamydia cases, 43 per cent of herpes-simplex cases and 37 per cent of gonorrhoea cases notified in 2016.

The number of cases of gonorrhoea increased from 1,302 in 2015 to 1,958 last year. Almost 90 per cent of cases were in men, and men who have sex with men were disproportionately affected, accounting for 42 per cent of cases. Late in the year an increase was also seen among women.

There were 512 notifications of HIV. The most frequent route of transmission was sex between men, which accounted for nearly half of all cases. One in five patients was infected through heterosexual sex.

The Health Protection Surveillance Centre says that 28 per cent of people diagnosed with HIV had previously been diagnosed with the disease in another country, and most of these were transferring their care to Ireland.

It advises going for regular tests, using condoms, and reducing the number of sexual partners as the best ways to have safer sex.