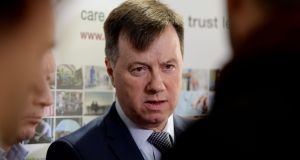 No new beds or additional staff are being provided as part of the Health Service Executive’s plan to combat overcrowding in hospitals this winter, the organisation has confirmed.

While previously planned new developments will increase capacity in hospitals in Waterford, Clonmel and Drogheda in the coming months, the winter plan for 2019/2020 does not envisage providing extra beds or staffing, HSE national director Liam Woods said.

Instead, funding will be being ploughed into additional nursing home places and home help hours.

With the number of patients attending emergency departments and being admitted to hospital rising faster than the rate of population growth, the health service will be under extreme pressure this winter to contain overcrowding.

In recent weeks, trolley figures have exceeded 600 on many days, with 571 patients waiting for admission to hospital on Thursday morning.

“This winter will be more challenging in terms of numbers and activity,” HSE chief operations officer Anne O’Connor acknowledged as the winter plan was announced.

More funding is being provided this year – €26 million to the end of the year compared to €10 million during the same period a year ago – much of which will be directed at helping people avoid going to hospital and helping patients be discharged as soon as they are fit to be.

Half the funding is being spent on the Fair Deal scheme for nursing home places to cut the waiting time for entry to four weeks, which it is hoped will free up hospital beds for sick patients. More than €4 million is being spent on transitional care, again to reduce the number of delayed discharges, and there is €2 million for home support packages.

“We are focused this winter on ensuring that patients are provided with the appropriate care to meet their needs as quickly as possible,” Ms O’Connor said.

She said all hospital groups and community health organisations have joint plans in place to manage service pressures in their areas this winter.

Some 1.1 million patients had attended an emergency department in the first 10 months of the year, a 3 per cent increase on the same period last year with admissions up by 1 per cent.

Further overcrowding is seen as inevitable this winter, and its severity will most probably be decided by flu trends. Kevin Kelleher, assistant national director of public health at the HSE, said this year’s flu in the southern hemisphere had been relatively mild and the main strain in it is covered by this winter’s flu vaccine.

Officials urged the public to do as much as they could to ensure they do not need to go to hospital this winter. They said people should get the flu vaccine, follow the correct handwashing practices and avoid others who are infected.

They said people with chronic diseases should be extra vigilant in managing their conditions in the winter months and pointed out that a rich Christmas diet poses challenges for people with diabetes or congestive cardiac conditions.

Vida Hamilton, HSE national clinical adviser on acute operations, urged people to “be clever” about their healthcare choices. She said the “walking well” should initially seek assistance in a pharmacy, while the “walking wounded” could be treated at injury units rather than hospital emergency departments.

The HSE hopes to expedite patient stays in hospital through greater use of rapid flu test technology and quicker screening of superbugs, so patients not requiring isolation can be identified more quickly.