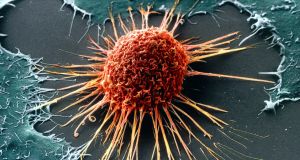 A cervical cancer cell. For every 1,000 women screened for cervical cancer, about 20 will have precancerous changes, but the traditional smear test will pick up only 15 of these.

A review of smear tests carried out under CervicalCheck is due, but haven’t we already had a review?

Yes, but. CervicalCheck has in the past looked back at the smear tests of women who had later developed cervical cancer. It only looked at about half of all cancer cases that had occurred and found several hundred where the result was different on re-examination.

It didn’t tell the women and when this emerged on foot of Vicky Phelan’s 2018 court case, there was huge controversy. As part of its response to the crisis, the Government promised a team of international experts would carry out a clinical review of the smears of all women who were diagnosed with cervical cancer since the screening programme was set up in 2008. The Royal College of Obstetricians and Gynaecologists (RCOG) in the UK was given the task of leading the review, which has taken far longer to complete than originally envisaged.

What will the RCOG review tell us that the earlier CervicalCheck didn’t?

Just over 1,000 women have consented to having their slides re-examined, about two-thirds of the total. Many are from a group of women whose cases were notified to the National Cancer Registry but were never audited before. Only a minority of the 221 women at the heart of the 2018 controversy are involved; many of these women are taking legal cases while more than 20 have died.

RCOG has promised to determine which cases of cervical cancer “could reasonably be attributed to errors in screening and reporting of cytology”. It says it will also make a determination as to whether these errors affected the treatment of women and their health outcome.

The process of relaying results to individual women is just about complete, and RCOG will shortly send an aggregate report to Minister for Health Simon Harris. This should give us our best picture yet of the problems that affected the screening programme.

Screening is not a perfect process. It is not a diagnostic test. A high degree of professional judgment is involved in reading slides. For every 1,000 women screened, about 20 will have precancerous changes, but the traditional smear test will pick up only 15 of these.

The RCOG reviewers re-examining the women’s slides were unaware what the original screener found, but they did know the women later developed cancers. This, in the view of many experts, means a review bias is unavoidable, ie, that their findings would be influenced by their knowledge of the subsequent cancer. They may also have enjoyed more time to review the slides, compared with the day-to-day exigencies of a busy screening programme processing thousands of slides every week.

However, abnormalities have been triple-checked, and RCOG has said its final report for each woman includes a statement on whether the abnormalities present were particularly difficult to identify, or where interpretation was felt to have been influenced by the review process.

The process of briefing individual women on their results is virtually complete, after which RCOG will send an aggregate report to Minister for Health Simon Harris. This will summarise the overall findings of the review and make recommendations for the CervicalCheck programme.

What happens after this review is complete?

The CervicalCheck controversy is far from finished. More than 120 legal claims are pending. A tribunal is being set up to process claims from women away from the glare of publicity.

Meanwhile, the screening community is nervously awaiting a crucial decision from the Supreme Court, due shortly, on whether screeners should have “absolute confidence” that a smear test has no abnormalities before passing it as clear. The decision could have huge implications for the future viability of all types of screening in Ireland.