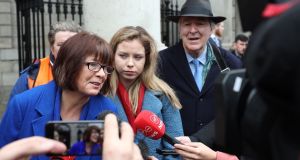 Mary and Aoife Bennett, from Naas, Co Kildare, speaking to the media on leaving the Four Courts on Tuesday. Photograph: Collins

Aoife Bennett has settled her case in the High Court in which she claimed the swine flu vaccination she was given in school 10 years ago caused her to develop narcolepsy, as well as a condition called cataplexy disorder, which involves the sudden, unpredictable loss of muscle tone.

The settlement was without admission of liability. However, the case raises important questions about the Pandemrix vaccine and the approval process it went through.

The vaccine was licensed by the European Medicines Agency (EMA) on June 20th, 2009 – just four months after the World Health Organisation declared a swine flu pandemic. At the time there was considerable fear about the potential for the new swine flu strain (H1N1) to cause serious illness and death. The process was much speedier than the normal assessment and licensing period for new vaccines.

In Europe one element of the accelerated process was an agreement to grant licences to pandemic vaccines based on data from pre-pandemic “mock-up” vaccines produced using a different virus. Another element, adopted by Ireland and other countries, including Canada, France and Germany, was to provide vaccine manufacturers indemnity from liability for wrongdoing, thereby reducing the risk of a lawsuit stemming from vaccine-related injury.

Some months after Ms Bennett received the vaccine, the first concerns began to emerge that Pandemrix might be associated with narcolepsy. However, the manufacturers, GlaxoSmithKline (GSK) and the EMA, which licensed Pandemrix, have not accepted that the association with narcolepsy has been proved to be causal.

But an investigation by the British Medical Journal (BMJ) has uncovered separate evidence about the safety of the vaccine. In a direct link to the Bennett case, lawyers found a series of GSK post-marketing safety reports that show a striking difference in the number and frequency of adverse events reported for three GSK pandemic vaccines approved and used across the world: Pandemrix, Arepanrix (both containing an adjuvant to boost the vaccines’ effect) and an unbranded H1N1 vaccine.

According to the BMJ, event tables embedded in nine reports spanning the four months between December 2009 and March 2010 offer a glimpse into the vaccines’ safety profiles. “For a range of concerning adverse events, reports were coming in for Pandemrix at a consistently higher rate than for the other two GSK pandemic vaccines – four times the rate of facial palsy, eight times the rate of serious adverse events, nine times the rate of convulsions. Overall, Pandemrix had, proportionally, five times more adverse events reported than Arepanrix and the unbranded vaccine.”

The BMJ article was referenced during the High Court case, where counsel for GSK submitted four articles were published challenging it.

Vaccination remains a safe and effective public health intervention. But with the conclusion of the test case on Tuesday, a number of important questions need be answered:

– Did the Irish regulator (the Health Products Regulatory Authority , or HPRA) analyse this data? Did it consider alerting doctors about the emerging concerns?

– Was the chief medical officer in the Department of Health informed? If so, why did Pandemrix continue to be administered to Irish people as the pandemic was on the wane?

– Were Bennett and others given sufficient information to enable them to make an informed consent about taking the vaccine?

– Is it reasonable and ethical to take shortcuts with the approval of medicines in the context of a global health emergency?