Number of smokers down 165,000 in five years, survey shows

High rate of obesity ‘a great cause of concern’, says Minister 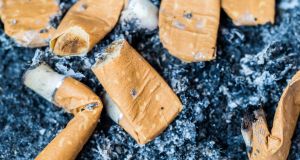 Smoking rates are higher in more deprived areas, at 24 per cent of the population, than in more affluent areas (14 per cent), and higher among those who are unemployed, at 40 per cent.

There are an estimated 165,000 fewer smokers in the country than five years ago, according to the latest annual Healthy Ireland Government-funded survey by market research company Ispos MRBI.

Some 17 per cent of the population smoke, compared with 23 per cent in 2015. One in four smokers said the plain cigarette packaging with health warnings, introduced in 2018, had been a good motivation to quit.

Smoking rates were highest among those aged 25-34 – some 26 per cent of this age group are smokers, although this figure has declined from 32 per cent in 2015.

Smoking rates are higher in more deprived areas, at 24 per cent of the population, than in more affluent areas (14 per cent), and are also higher among those who are unemployed, at 40 per cent.

Some 40 per cent of people who smoked in the last 12 months have attempted to quit, according to the survey of 7,413 people aged 15 and older interviewed between September 2018 and 2019.

One in four attempts to quit smoking in the last 12 months was reported to be successful.

Minister of State for Health Promotion Catherine Byrne said she was concerned at the high rates of smoking among young people and the unemployed and in deprived areas.

The survey found that 60 per cent of the people surveyed were found to be overweight or obese, with just 37 per cent of adults having a normal weight. The figures were a “great cause for concern”, said Ms Byrne.

On average, the people surveyed reported getting 7.1 hours of sleep on an average week night or work night, with the 15-24 age group receiving the most average sleep, at 7.8 hours a night.

The average amount of time reported spent sitting on a weekday was 5.1 hours – down from 5.3 hours in the 2015 survey – declining to 4.4 hours on a weekend day.

The survey found that 46 per cent of people are achieving the minimum level of recommended physical activity where they are moderately active for at least 150 minutes a week.