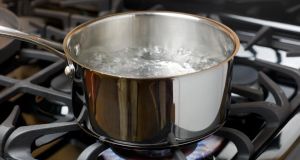 The notice in Granard, Co Longford was brought into force on November 9th by Irish Water. Photograph: iStock

Granard in Co Longford is currently subject to a boil-water notice, which is causing much disruption to the local community of 2,500 households.

The notice was brought into force on November 9th by Irish Water, the HSE and Longford County Council after a mechanical issue arose at Lough Kinale water treatment plant “that resulted in the treatment process being compromised”.

Such issues bring risk of illness, with E.coli often being the culprit. It is one of the biggest threats to public health from water supplies – in Ireland, group water schemes, particularly those in private ownership, are more likely to contaminated with the bacteria. During summer months, it can become an issue in bathing waters.

E.coli can led to diarrhoea, abdominal pain, fever and sometimes vomiting. It can cause more serious illnesses in infants, young children, older people and those with an underlying health condition.

Local councillor Joe Flaherty (FF) says the impact in Granard is widespread. “As with any boil water notice, 2,500 people in Longford now need to purchase bottled water and boil water. This really puts a burden on people who are sick, elderly people, and on businesses.”

While he accepts Irish Water is working with colleagues in the council to resolve the issue as soon as possible, “people’s patience is wearing thin”.

This is because of the time of year, children back at school, farmers needing clean water, and businesses gearing up for Christmas.

“The big bugbear is that it hasn’t got anywhere near the attention that recent boil notices in the Dublin region have received,” he added.

“If E. coli is found in drinking water, it can mean the disinfection treatment process is not working properly or contamination has entered either the water reservoir or distribution pipes, after treatment,” according to the EPA.

The environmental watchdog keeps a “remedial action list” of water supply schemes requiring work to protect them against bacteria such as E.coli and cryptosporidium as well as other substances.

Boil-water notices are in place in many parts of the country for a variety of reasons. Currently, for instance, they are in place in Ballymorris, Co Wicklow; Tallanstown, Co Louth, and for some householders living near Lough Talt in Co Sligo. Irish Water issues updates through an interactive map available at water.ie.