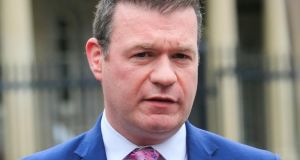 A Government decision to fund lifesaving cancer drugs for the 221 women caught up in the CervicalCheck controversy while withholding it from other women with the disease will ‘explode in everyone’s face’, according to Labour TD Alan Kelly. Photograph: Gareth Chaney Collins

A Government decision to fund lifesaving cancer drugs for the 221 women caught up in the CervicalCheck controversy while withholding it from other women with the disease will “explode in everyone’s face”, an Oireachtas committee has been told.

“You can’t discriminate between two people based on when they got cancer,” said Labour Party health spokesman Alan Kelly, referring to the decision to provide access to the cancer drug pembrolizumab to some of the CervicalCheck women.

“Pembro” is licensed in Ireland for some forms of cancer, but not for cervical cancer, but women in the 221 group can access it. Vicky Phelan, the Limerick woman whose court case brought the controversy to light, has credited the drug with greatly slowing the progress of her cancer.

Mr Kelly asked whether it was equitable, fair or legal that one group of women, who are part of the 221 women caught up in the CervicalCheck controversy, can access pembro free “outside the normal procedure”.

“How can it be that Áine Morgan from Loughrea is fundraising with cervical cancer to raise funds to go on pembro? She’s not one of the 221 women, yet Vicky Phelan is getting it free from the State?”

Treatment with pembro costs €8,500 every three weeks, he pointed out. “I can’t see how you can distinguish between two women with cervical cancer, one getting it free of charge and others who aren’t,” he said.

“There is deep unease in the HSE and in other parts of the health service regarding this,” Mr Kelly added, noting that a precedent had been set.

Mr Kelly said he had discussed the issue with Ms Phelan and she agreed with his views.

HSE chief pharmacist Shaun Flanagan said it was unlikely that pembro would be licensed for treatment of cervical cancer before 2021. He said he could understand that there were situations where the State might make exceptions to the normal process for drug approvals.

Prof Michael Barry, director of the National Centre for Pharmacoeconomics, said in his view all medication should be assessed on value for money grounds but that didn’t happen in this case.

HSE national director for primary care John Hennessy said that in rare cases, usually involving life-threatening situations, funding for drugs can be provided “outside process” where an emergency response was required.