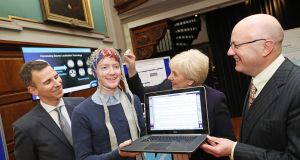 A new research centre based at the Royal College of Surgeons in Ireland aims to help transform the lives of 800,000 people in Ireland currently affected by neurological disorders.

The centre is aimed at translating breakthroughs in the understanding of brain structure and function to improve treatments and quality of life for people with neurological diseases – and initially will concentrate its efforts on epilepsy and motor neurone disease (MND).

Neurological disorders impose an associated health and societal cost greater than €3 billion each year in Ireland, according to Prof David Henshall, director of FutureNeuro Research Centre, which was launched on Monday.

Minister for Business, Enterprise and Innovation Heather Humphreys marked the launch of the centre which will lead research on both chronic and rare neurological diseases. It has been awarded €10.3 million in funding from Science Foundation Ireland with a further contribution of €3.3 million from industry partners.

While MND was rare it was 'catastrophic', as many live for less than a year after diagnosis

“Brain diseases such as epilepsy and MND have a profound impact on people’s lives and until we understand the underlying causes, we are not going to be able to find cures or improve treatments,” Prof Henshall said.

Epilepsy affected 40,000 people; a third of whom were “drug resistant” to treatment of seizures that are debilitating and potentially life-threatening. While MND was rare it was “catastrophic” as many live for less than a year after diagnosis, but there were aspects of the disease that may be linked to the causes other conditions such as Parkinson’s or Alzheimer’s disease, he noted.

By bringing together scientists, neurological clinicians, patient groups and industry partners they hoped to offer patients faster, more precise diagnosis and fewer hospital and emergency department admissions. “Ultimately we hope that the research at FutureNeuro will some day lead to a cure for certain brain diseases,” he added.

The research centre is focused on diagnostic challenges as well as identifying genetic links; therapeutic needs and clinical care of people with neurological disease. Prof Henshall said he was staggered by research from the Neurological Alliance of Ireland which confirmed one in four people were touched by neurological disease directly or through family members or someone they know.

FutureNeuro’s priorities included improved understanding of the basic mechanisms of neurological diseases and the development of “precision medicine” into clinical practice whereby a patient’s genetic code informs a doctor’s choice of treatment.

Already through the use of Apps or smartphones patients can easily report response to a new therapy, which enables clinicians to act more quickly in perfecting treatment.

Genomic sequencing offered the possibility that a single genetic error in a patient’s DNA could be identified and lead to an immediate change in medication, Prof Henshall said.

The long-term hope was development of new medicines “that work by targeting previously unreachable genes and companion nanotechnology solutions to deliver them to the affected brain region”.

Understanding of “brain function and dysfunction” had come a long way compared to five or 10 years ago, he said, but there was still an enormous gap between identifying a faulty gene and using that to design a new therapy. Technological advances would help make cures more realisable, he said. Safe and effective treatment of neuromuscular conditions had emerged, and it was not such a big jump to apply such options to the brain.