Teenager has been through brain surgery, a neuro-stimulation operation and steroid treatment. Now his seizures are under control 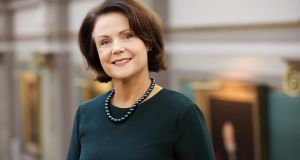 Collette Delahunt, whose son Seán has severe epilepsy and is now one of 50 people who are undergoing intensive evaluation at the FutureNeuro research centre in Dublin. Photograph: Julien Behal Photography

Just before his fourth birthday Seán Delahunt had his first seizure. Collette Delahunt from Dublin recalls the “dreadful shock for the whole family” when her son’s life took a dreadful turn.

He underwent a steep decline from that point; epileptic seizures increased from one a week to 40 a week. Being a young child, he was initially treated in Crumlin Children’s Hospital. He has undergone a difficult journey, undergoing multiple treatments; brain surgery, a neuro-stimulation operation and steroid treatment.

Seán has “intractable epilepsy” which is resistant to drug treatment, but confirmation of this was no indication of cause, and was particularly painful for the Delahunt family. “We wondered had something happened to him. We questioned our own actions. We had no answers,” Collette explains. “During this time we craved an explanation. Why did this happen? What was causing this to happen? How can a healthy boy become so utterly transformed?”

Inherited genetic tests in Crumlin came back negative, but with her husband Liam they were aware of the emerging potential of genomics sequencing – advanced assessment of complete DNA in an individual. “We felt we needed to go further.”

His consultant in St James’s Hospital Dublin Dr Colin Doherty alerted her to a genetic clinical study being undertaken by the team that is now at heart of the new FutureNeuro research facility at the Royal College of Surgeons in which 50 candidates are undergoing intensive evaluation.

Seán was accepted a year ago. Six months later the team came back with news that he had an underlying genetic complication – a particular genetic mutation – which has contributed to his seizures and developmental delay. “That was really profound for us,” she recalls.

While treatment has not changed, it was a definitive diagnosis. There may be no immediate cure, but Collette says it offers hope. It raises the possibility of him benefiting from precision medicine and an individualised treatment plan. “We are more informed about what medications are likely to be more successful.”

In the past, Seán has been treated by multiple combinations of 15 medications. Already, his seizures are better controlled. He is now 19 and doing well with the help of adult health support services.

“We will never stop fighting to help him become seizure free . . . That is our goal. But at least in the last few years he has had an opportunity to embrace life and explore his potential. We are on a journey and hopefully with research that journey will be brighter,” she says.