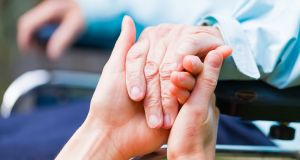 A paucity of homecare options has also been a factor in the rise of delayed discharges from hospitals.

An additional 550 homecare packages are to be provided over the winter period in an effort to minimise the trolley crisis, the HSE has announced.

The extra packages are among a range of measures designed to free up hospital beds by allowing for older people to be moved to stepdown care before Christmas and into the new year. The measure will be funded separately from the €10 million allocated in the budget last month for measures to reduce winter overcrowding in hospitals.

A paucity of homecare options has also been a factor in the rise of delayed discharges from hospitals, from 481 in January to 683 in September. Delayed discharges clog up hospital wards with well patients and exacerbate overcrowding in emergency departments.

Minister for Health Simon Harris and Minister of State for Older People Jim Daly said the package would also include additional transitional care beds and €4 million for aids and appliances.

Mr Harris said the HSE’s winter plan would be finalised over the coming days and published later this month.

A coalition of 25 groups forming part of the Homecare Coalition had earlier said the Government needed to address urgently the chronic underfunding of homecare as part of its efforts to avoid a winter trolley crisis. The group called for an investment of €10 million to be ringfenced for additional homecare staff to provide much-needed services over the Christmas period.

A Fianna Fáil motion being debated in the Dáil on Wednesday also called on the Government to adequately resource home care supports.