INMO delegates vote to strike if pay not increased 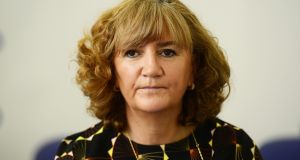 Delegates at the Irish Nurses and Midwives Organisation (INMO) conference in Cork have voted unanimously to strike if pay is not increased.

An emergency motion from the INMO executive council on Thursday asked members for their sanction to strike if the Government fails to heed their demands for pay increases.

The union’s president, Martina Harkin-Kelly, said they were tired of being “good girls” who endured horrendous pay and conditions.

“The narrative has been that we are good girls, great little girls, lovely cailins. We don’t live on admiration. I have, as most people have in this room, a certificate, a diploma, a degree and two Masters.

“It has taken me 35 years to get above and on the salary I am on at the moment. My nephew who works for Vodafone Ireland is earning higher than me having only worked there for 10 years. The target for me is pay. We need them to start recognising that pay is the answer.”

The conference heard nurses and midwives plan to ballot for industrial action if the outcome of the Public Service Pay Commission (PSPC) negotiations are rejected.

Industrial relations officer Tony Fitzpatrick warned the Government would be hit by a “juggernaut” if it failed to address the issue. He said there was a recruitment and retention crisis for nurses within the healthcare system and that the HSE was “in denial”.

The conference was told Ireland had 2,000 fewer nurses working in 2018 than 10 years ago and that the country had more acute hospital beds back when Charles Haughey was taoiseach than it did now.

INMO vice-president Margaret Frahill said graduates would continue to leave the system in massive numbers if the pay scales were not addressed as a matter of urgency.

“A nurse with maximum scale is on €22.25 an hour. In Australia, that is €30 an hour. Of the graduates who will come out at the end of the year, 70 per cent have said they are going to emigrate.

“Short-term thinking and short-term planning has led to this crisis,” she said.

“We are the lowest paid professional grade in the entire health service. That is an absolute disgrace. We have been very patient and have worked in intolerable conditions. If our pay issues are not addressed, there will be no Irish nurses working in the profession.”

Ms Frahill said the 39-hour working week for nurses in Ireland was higher than in other countries. She spoke of an anomaly which sees some healthcare assistants who report to nurses making more money than the nurses to whom they report.

Meanwhile, a leading academic has warned the exodus of Irish nurses and medical staff to work in the UK could “considerably deepen” after Brexit, following a “collapse” in the number of other EU professionals joining the NHS.

Prof Anthony Staines from the department of nursing and human sciences at Dublin City University (DCU) said a hard Brexit could also have significant consequences for the broader Irish healthcare sector, including cross-border patient services. Speaking at a conference hosted by the DCU Brexit Institute on Thursday, he said the rate of Irish-trained medical staff leaving for the UK could increase in the aftermath of the UK’s departure.

About 1,000 EU nurses were registered every month by the NHS before the Brexit vote, he said, the majority of whom were from countries other than Ireland. The numbers had since “collapsed”, he said.

“There is no obstacle for Irish people going to the UK,” he said. “I think [an increase in demand for Irish staff] is a risk . . . we will find it harder to keep our own.”