Vicky Phelan: ‘I’m here to tell the tale. And by God I’m going to take these guys on’ 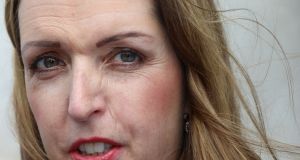 The woman whose High Court case shone a light on the current scandal surrounding cervical screening has “no faith” in the current management of the programme.

Vicky Phelan (43), from Annacotty in Co Limerick, is suffering from terminal cancer after earlier receiving a negative smear test under the HSE’s CervicalCheck programme.

On Monday, the HSE confirmed a total of 162 women were not informed of a delay in their cancer diagnosis.

A total of 17 of these women have died, but the cause of death is not yet known. The HSE is still trying to contact another 13 women.

Ms Phelan said on Monday she never imagined so many women could be affected.

“I could be another one of those women. If I had died I would have been on that list. Thankfully I didn’t and I’m here to tell the tale. And by God I’m going to take these guys on. I think it’s disgraceful what they’ve been doing to the women of Ireland.

“I never thought the problem would be of this magnitude. I really didn’t think I’d be waking up this morning to this type of news,” an emotional Ms Phelan said, adding that “they fecked with the wrong women.”

She said she does not have “any trust in the management of the programme as it currently stands” but urged women to continue getting smear tests despite the controversy. “Cancer screening does save lives.”

Ms Phelan settled a High Court action for €2.5 million earlier this week against a US laboratory over a 2011 smear test, which wrongly gave a negative result for cancer.

She was diagnosed with cancer in 2014 and told of the false negative in the smear test only in September 2017.

Taoiseach Leo Varadkar confirmed on Monday the Government will hold an inquiry into the failure of the screening programme to tell women they were falsely given all-clear smear tests.

Mr Varadkar said the inquiry would establish the facts around the controversy, attempt to understand “why these appalling communication failures happened” and look at whether a different testing system might have reduced the number of “false negative tests.”

Ms Phelan said she does not want to see an “inquiry or tribunal that will take years” but also doesn’t want an investigation taking place behind closed doors.

“I am happy to see there is going to be an inquiry. I’d be very reluctant to see one that can’t be reported on until it’s finished.”

She said the inquiry should examine why the HSE fought against her High Court case so hard, including asking for details of how sick she was and how soon she might die.

“It’s upsetting to think they demanded proof that I was likely to die earlier than expected. I mean Jesus, how dare they?” Ms Phelan asked.

In January of this year, she was given between six and 12 months to live.

“In fairness, the money I’m using to pay for the drug has come from the kindness of strangers, my family, my friends and my community. Thank you very much to all those people because that’s what’s helping me to pay for this at the moment.

Ms Phelan said that it is “scandalous” the HSE has no offered to meet the cost of the drug treatment.

“When you think about it, they are at fault for my misdiagnosis and I’m the one paying for my treatment, it’s scandalous.”