More than 6,000 calls to CervicalCheck helpline, which one woman branded ‘useless’ 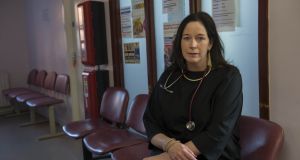 Dr. Illona Duffy: “We had a couple of calls from women who have had their smear tests and are just wondering can they be sure their smear is okay. We’re waiting to get some guidance from the HSE, and we'll get back to them.” Photograph: Brenda Fitzsimons

General practitioners across the country say they have been receiving calls from women worried about their smear tests in the wake of revelations in the Vicky Phelan case.

“We had a couple of calls from women who have had their smear tests and are just wondering can they be sure their smear is okay,” Dr Duffy said.

“We’ve taken their names and said we’ll get back to them when we know what’s planned or what is to happen.

“We’re waiting to get some guidance from the HSE and we’ll get back to them.”

Dr Gary Stack from the Park Medical Practice in Killarney, Co Kerry said it had received three calls on Monday from women looking for “reassurance” regarding their smear tests.

Dr Stack said the Irish Medical Organisation (IMO) had been in touch to say they are due to meet Department of Health officials on Wednesday to clarify aspects of Minister for Health Simon Harris’s announcement that all women aged 25 to 60 will be entitled to have a repeat smear test.

They are due to discuss precise entitlements of patients, resourcing, where smear tests are to be sent, quality assurance criteria and the processing of claims.

“Again, everything falls back to the GP, are we then trying to create space for work,” said Dr Stack. “They just assume that this can be added in.”

Dr Martin Daly from the Ballygar Health Centre in Co Galway said it provides around 20 smear tests per month but had received no calls in relation to cervical checks on Monday.

“We would be quite a busy practice, but strangely enough we haven’t got any calls,” he said.

I rang wanting to know the years of erroneous checks. The woman on the phone refused to answer the question and said she would refer me to management

More than 6,000 people contacted the CervicalCheck helpline as of Monday afternoon. The HSE said the helpline is currently receiving a “large number of calls”.

“We acknowledge that callers may experience some difficulties getting through and apologise for this,” it said.

It began operating on Saturday morning, after an initial technical glitch delayed its start.

One woman, who wished to remain anonymous, has described the helpline as “effectively useless”.

“I rang wanting to know the years of erroneous checks,” she told The Irish Times. “The woman on the phone refused to answer the question and said she would refer me to management.

“However, she wasn’t able to tell me when management would get in touch. What is the point of this helpline if it can’t tell us the window of the erroneous checks?”