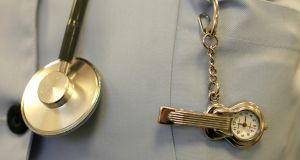 About 1,000 EU nurses were registered every month by the NHS before the Brexit vote but the numbers had since “collapsed”. Photograph: Frank Miller

The exodus of Irish nurses and medical staff to work in the UK could “considerably deepen” after Brexit, following a “collapse” in the number of other European Union professionals joining the NHS, a leading academic has warned.

Prof Anthony Staines at the department of nursing and human sciences in Dublin City University said a hard Brexit could also have significant consequences for the broader Irish healthcare sector, including cross-Border patient services.

The issue of Irish-trained medics moving to the UK has long been highlighted by the sector.

Prof Staines was speaking during a conference, Brexit: Medicine and Public Health, hosted on Thursday by the DCU Brexit Institute.

As part of ongoing research on the subject, he said the rate of Irish-trained medical staff leaving for the UK could increase in the aftermath of the UK’s departure from the EU.

About 1,000 EU nurses were registered every month by the NHS before the Brexit vote, he said, the majority of whom were from countries other than Ireland. However, the numbers had since “collapsed”.

“There is no obstacle for Irish people going to the UK,” he said. “I think [an increase in demand for Irish staff] is a risk . . . We will find it harder to keep our own.”

Other areas of risk identified in the research include cross-Border healthcare, specifically shared services in cancer, paediatric surgery and diabetes treatment.

The free movement of patients, medical devices, pharmaceuticals and even blood – the Republic offers a back-up supply to the North – all face uncertain futures until some kind of deal on Brexit is negotiated, he warned.

“At the moment it looks as if there is a real risk for hard Brexit and the consequences [for health],” he said. “I think we need to focus our minds a little bit more.”

Tony Fitzpatrick, director of industrial relations at the Irish Nurses and Midwives Organisation, said it has already had confirmation from UK unions that employers there would be “targeting” Ireland as a “key objective area” for recruitment after Brexit.

Mr Fitzpatrick said the majority of nursing students are already approached by the NHS, given their appeal as high calibre, English-speaking recruits. “That’s why the Brexit situation will worsen the recruitment and retention crisis,” he said.

Last November it emerged that 1,107 EU nationals took up UK nursing jobs in the year to September, an 89 per cent drop from the preceding 12 months.

The figures were released by the UK nursing and midwifery council. At the time, the council’s chief executive, Jackie Smith, said Brexit was not to blame for the reduction which she described as “minuscule” in overall staffing terms.

In Ireland, the Department of Health said that until the UK’s post-Brexit relationship with the EU becomes clear, the precise implications for the health sector “will remain unclear”.

“There are a number of initiatives currently under way in the HSE to improve staffing levels, which includes measures aimed at recruiting and retaining nursing staff,” it said.

“Some of these measures include offering all 2017 and 2018 nursing graduates permanent positions, increasing the number of undergraduate places and overseas recruitment campaigns.”

It said this approach had resulted in 942 additional nurses last year.