One year on: Has Orkambi improved CF patients’ lives? 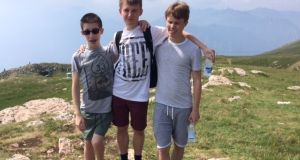 Mark, David and Tom Kerins, who all have CF, on holiday in Italy last year. Photograph: Maggie Kerins

The cystic fibrosis drug Orkambi has not turned out to be the “miracle drug” some had hoped but the Government’s deal with manufacturers means better drugs could be coming soon.

Speaking one year after the Government agreed to State-funded access to the drug, consultant respiratory physician at Dublin’s Beaumont Hospital Gerry McElvaney said: “Its not a miracle drug but it is a step in the right direction. The arrangement the Government has for the pipeline of CF drugs to come will prove very useful to us.”

Cystic Fibrosis is an inherited chronic disease that causes the body to produce unusually thick, sticky mucus that clogs the lungs and obstructs the pancreas. It also stops natural enzymes from helping the body break down and absorb food.

Ireland has the highest incidence of cystic fibrosis in the world, with over 1,200 people here living with the condition.

A bitter fight for access to the drug Orkambi ensued last year after it was revealed that the manufacturer Vertex was seeking €159,000 per patient for the drug, which the HSE estimated would cost some €400 million over five years.

Hundreds of people protested outside the Dáil in March 2017, demanding access to the drug which was shown to improve patients’ lung function and reduce hospitalisation and exacerbations (a worsening of symptoms) by 40 per cent.

On April 11th, 2017, after seven months of negotiations with Vertex, Minister for Health Simon Harris announced a deal had been struck to provide CF patients in Ireland with State-funded access to the drugs Orkambi and Kalydeco.

That deal also included access to pipeline drug therapies that are currently showing promise in the advanced stages of clinical trials.

Now, one year on, what has been the impact of Orkambi on the CF population in Ireland, and what other treatments are coming down the line?

It is estimated that 60 per cent of the CF population in Ireland have now begun Orkambi treatment, which includes two drugs - lumacaftor and ivacaftor.

Professor of medicine at RCSI Gerry McElvaney says “in general the results from Orkambi were better than I expected and I think it has given significant relief to a significant number number of patients”.

He says the majority of patients felt “some improvement,” as they “would have been in the hospital less with less exacerbations”.

That said, there was little improvement in terms of lung function and a small percentage of patients could not tolerate it at all - “they felt it made them very short of breath and they got reactions to it,” Prof McElvaney says.

There are, however, better drugs coming down the tracks.

“There’s going to be better forms of Orkambi produced and I would say it will slowly but surely lead to significant improvement in care”.

Prof McElvaney says there is a “very optimistic” triple therapy drug being tested in the US at the minute which has had exceptional results so far.

This drug improves upon Orkambi by replacing one its components - lumacaftor - with a more refined version and adding in an additional third drug to the therapy.

“These drugs have been developed very quickly and there is more than one company developing them, which is very positive. It will speed things up having two companies working on the same thing - they haven’t got it all to themselves.”

He is hopeful that the aspect of the Government’s deal with Vertex which included mention of a pipeline of drugs means this medication could be available in Ireland before many other countries. It is unlcear, however, if any new drugs will be automatically available to people with CF or if another lengthy approval process will be required.

‘I knew it could potentially transform my quality of life’

Faela Smyth (30) from Sandymount in Dublin 4, has been on Orkambi for six months and says it has transformed her life.

“It’s easier on a day to day basis I have a huge amount more energy. I’m waking up able to jump out of bed and do my day’s work, rather than having really sluggish days with a chest full of mucus.”

Faela was diagnosed at the age of four, and describes her CF as mild. She was first hospitalised at age 10 and started regular intravenous antibiotics at the age of 17.

She spent six weeks in hospital in the the second half of her leaving cert year.

When she moved to the UK in 2014 her health took a serious turn for the worse, with her lung function dropping significantly.

When she moved home in 2017 she says “it just looked like my health was ultimately failing”.

Thinking back to this time last year, when the decision to provide Orkambi was announced, Faela says: “I’ll probably never forget the day this time last year when my Mum woke me up from my nap - which I no longer tend to do now, I don’t nap - to tell me Simon Harris had OK’d Orkambi”.

She knew then that Orkambi could “potentially transform my quality of life.”

Faela now works full time as a veterinary nurse, something she never thought would be possible at her age.

“Most of my friends that had CF are now dead, and by now I assumed that I would be dead because I’ve just turned 30.

“This is kind of the age where I assumed I’d either be bad enough to be house-bound... Now I’ve realised I have to start opening up my world and think - am I going to get a mortgage? What am I going to do for the next 30 years? I’m going to have to do the boring stuff!”

Her weight has stabilised and her lung function has gone up, and she says she feels better now than she did 10 years ago.

“Because of the decision by Harris to approve this drug I am now able to work a full time job, I am getting money that is remotely livable on and I’m finally happy after so, so long.”

Faela says she wants to tell the Minister: “Look how amazing this is - you can transform me into a person who can do anything they want to do”.

‘They are blessed to be able to take it’

All three of Maggie and Damian Kerins’ children were born with cystic fibrosis and have been on Orkambi since last year.

They all live in Dun Laoghaire with their parents and have have generally been very well, Maggie says.

“They’re not on IVs, they rarely have hospitalisations and they just adhere to the regime of physio and meds”.

That regime is a difficult one, but it’s “what they grew up with”, Maggie says.

All three take their medication and do physio in the morning, they do nebulisers once a day and every time they eat they have to take enzymes, which replace what the pancreas would normally do.

Although their health has been good, Maggie was very anxious that they were given access to Orkambi and wrote to the drug manufacturer Vertex while the negotiations were taking place.

“Even though I knew our boys were very well and I knew how blessed they were I always worried about what was around the corner.

“When I heard about the Orkambi and I knew our boys were eligible I actually wrote to Vertex and said please, please, please give us the drug - I was clasping at straws.

“I just thought if there was a slippery slope coming for the boys how wonderful would it be if we could avert that?”

David and Mark have been on the drug since July, while Tom started on it in September.

“They are blessed to be able to take it - it was very expensive and was very hard fought for.

“Hopefully it will prevent them from any future exacerbations or hospitalisations,” she says.

There hasn’t been any huge improvement in their health, but Maggie is hopeful that it is putting off any worsening in their condition by acting like “an insurance policy”.

One Year On is an Irish Times series which revisits some of the biggest stories from last year to see what has happened since. Are there any stories you would like to see an update on? Email ntowey@irishtimes.com