Warren Reilly, whose two daughters died in Portiuncula hospital, says report must be acted upon 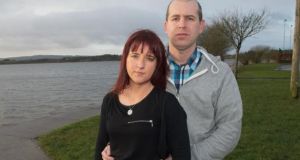 The father of two baby girls who died during their delivery at Portiuncula University Hospital has called for the recommendations of a report into maternity services at the hospital to be acted upon immediately and not be left “to gather dust”.

Warren Reilly, whose two daughters Asha and Amber died in the hospital in 2008 and 2010, expressed relief that the report had finally been published but cautioned against complacency in implementing the document’s findings.

The delayed report, which was commissioned in January 2015, examines the delivery and neonatal care of 18 babies at the Galway hospital between 2008 and 2014. Some of the babies died while others were left with life-long disabilities.

Mr Reilly, who received a copy of the report at 11am on Thursday, said the lack of availability of senior staff had played a role in the complications which arose during the delivery of babies in the hospital. “Senior staffing in particular is where the issues lie,” Mr Reilly told The Irish Times. “It’s the lack of senior staff, ownership by these staff and particularly a lack of willingness to escalate the situation beyond the midwife or registrar on call at the time.”

“The key thing for me that I’ve taken away from reading the report is that if you had a regular or straightforward pregnancy at the hospital then everything was normal but when things went wrong or there was a high risk they simply weren’t capable or trained properly for that scenario. You can only have a safe service when you’re capable of responding to a high risk situation.”

Mr Reilly’s daughter Asha was delivered stillborn in 2008 after his wife Lorraine suffered a massive placental abruption. During a hospital check-up six weeks after Asha’s birth, the couple say they were told if they decided to have another baby the hospital would take extra special care of them.

“We were told this is an unfortunate incident, that these things simply didn’t happen and that it was the only case in the hospital. What we’ve discovered from talking with other families is they were told exactly the same thing.”

In 2010, Ms Reilly was admitted to the hospital as a “high risk” case. Her daughter Amber was delivered by C-section with the umbilical cord tied around her neck. Amber was transferred to the National Maternity Hospital in Dublin and died six days later.

“In 2010 we know five other families went through the same torment we went through. We were led to believe it was just bad luck.”

Mr Reilly says there was “no disclosure” from the hospital regarding the circumstances around his daughters’ deaths. “There was no willingness to explain to us in an honest and open way what had happened.”

He described the effect on the families who lost a child or whose child was disabled during childbirth as “everlasting” and said families whose babies had survived childbirth are still struggling to access the necessary healthcare services for their child.

“It’s about making sure that this review doesn’t sit on a shelf somewhere but that it’s taken as an opportunity to improve services and make them safer. We’re not just talking about the past, we’re talking about the present and the women who are going on to have babies. They need to rely on these findings to make sure it’s a safe experience.”