CPL sent tests to labs in Florida, Nevada and Hawaii, but CervicalCheck did not know 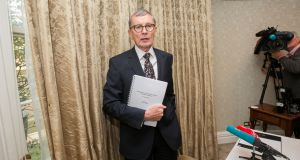 Dr Gabriel Scally during the launch of the Scally report into the CervicalCheck screening programme on Wednesday. Photograph: Gareth Chaney Collins

CervicalCheck and the HSE were unaware that a contracted US lab outsourced Irish smear tests for testing to other US labs in Texas, Florida, Nevada and as far away as Hawaii, the Scally report found.

During a visit to CPL in Austin, Texas, the scoping inquiry was “surprised” to learn that a “significant proportion of tests had in fact been undertaken in “a much smaller facility in San Antonio, Texas.”

Dr Gabriel Scally, who carried out the inquiry, said he will investigate further how the Austin, Texas-based lab contracted by the HSE sent Irish smears to non-CPL labs in Texas; Las Vegas, Nevada; Orlando Florida, and Honolulu, Hawaii.

Dr Scally says in his report that neither CervicalCheck, the national screening service, nor the HSE was aware that non-CPL laboratories were used to test Irish smears during its contract with the HSE.

However, he said he was satisfied that the quality management processes were “adequate” in CPL.

The other labs were owned by Sonic Healthcare, the same Australian parent company that owned CPL.

“An insignificant number [of] CervicalCheck cases were reviewed in non-CPL laboratories during 2010 in order to address an acute capacity deficit related to surges in workload arriving in the laboratory due to logistical issues,” Sonic Healthcare’s chief executive said in a letter to the scoping inquiry.

The additional information from Sonic “raises a number of questions which, at the time of writing, have yet to be explored in detail,” the Scally report says.

Dr Scally said that the scoping inquiry only became aware last month that CPL, which has not been used by CervicalCheck since 2013, had distributed slides to five other labs as part of the screening process.

“This information has only come to my attention in recent weeks,” he said.

“It clearly needs further and detailed examination along with some very closely associated issues of procedure and accreditation. I am very happy to provide the Minister with a supplementary report on these matters in due course.”

CPL was the lab that settled the High Court action taken by Limerick mother of two Vicky Phelan for €2.5 million, a case that revealed the widespread non-disclosure of smear test audits to scores of women.

Dr Scally stressed that all of the labs contracted by the HSE met their regulatory requirements in their own country.

While there was abundant research to show that “screening sensitivity” varies in different countries, “all the current laboratories have performance which is acceptable in their country,” he said.