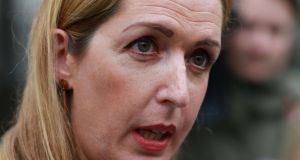 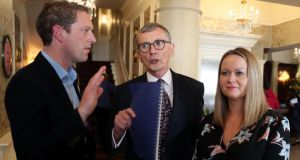 Dr Gabriel Scally (centre) with Stephen Teap, whose wife died before she was told that her smear test had been wrongly interpreted, and Lorraine Walsh, who received an incorrect smear test. Photograph: Brian Lawless/PA Wire

Failures to tell patients fully about their medical histories show that doctors “absolutely” still have a God complex, a representative of the families affected by the CervicalCheck controversy has said.

Stephen Teap, who only learned about his late wife Irene’s incorrect smear tests after the controversy broke, said the Scally report’s findings showed that doctors did what they want without concern about whether they should tell their patients.

Mr Teap dismissed the current policy around open disclosure for doctors as “a complete and utter joke”.

He called for the Government to implement immediately Dr Scally’s 50 recommendations to improve the cervical cancer screening service, regardless of whether it proceeds with a commission of investigation or not.

“There is still a lot more work to be done in going into more detail around the failures in the system and who is and was at fault,” he said.

Ms Teap, from Cork, died of cervical cancer last year. Her husband only learned earlier this year that an audit after her cancer diagnosis in 2015 showed that smear tests in 2010 and 2013 incorrectly showed no abnormalities.

Vicky Phelan, whose High Court settlement in April exposed the non-disclosure of incorrect smear tests, said the report vindicated the questions she raised about the matter.

“It is time for some people to eat some humble pie and perhaps apologise,” she said on Twitter. “I won’t hold my breath though.”

Mr Teap said that Dr Scally should be “offered the opportunity to investigate further the failure he has identified, in a commission or a different inquiry” to find the “names who let the system down.”

It is time for some people to eat some humble pie and perhaps apologise. I won't hold my breath though...
Cervical screening system was doomed to fail at some point, Scally report finds https://t.co/OgAYAOy4kr

The Cork man and Galway woman Lorraine Walsh, who represent the 221 affected women and relatives of those women who have died, expressed concern about the details in Dr Scally’s 170-page report.

Ms Walsh, who has said she lost her chance to have children over an incorrect 2011 smear test, described the contents as “very distressing and very emotional.”

She said that it raised “very concerning issues” about how the Texas-based Clinical Pathology Laboratories, which carried out smear tests for CervicalCheck until 2013, had outsourced Irish smear testing to other laboratories in Texas, Florida, Nevada and even Honolulu in Hawaii without CervicalCheck knowing.

The way the Scally report highlighted the awarding of the testing contracts “’weighted very heavily on cost’ was totally unacceptable and something we found very upsetting,” she said.

The lack of organisational structure and defined job roles within CervicalCheck concerned her, she said, but “most concerning” was the lack of quality control within the screening service in regularly reviewing the labs that carried out the smears.

Ms Walsh said the lack of trust patients have in doctors over not being told about incorrect tests as a result of this controversy “will go on for years”.

“These women, including myself, have literally put our lives in the consultant’s hands. I have lived to tell the tale but also I have been let down badly by not being told about what happened in my own case,” she said.

Mr Teap said: “What we are looking at here is a handful of consultants that were dealing directly with the women involved in this that took it upon themselves not to disclose information and therefore lost the trust of the system.”

Dr Scally’s recommendation that mandatory open disclosure be introduced under the introduction of the Patient Safety Bill would “force their hand to actually share the information,” he said.

Speaking to the RTÉ radio’s Ray D’Arcy Show, Ms Phelan said she hoped all the recommendations of the Scally report would be implemented by the Government.

“He feels very strongly, and it’s one of the things I liked about Gabriel from the get-go, he has a sense of social justice and fairness,” she said.

“He saw clearly, straight away, that women had been very badly treated. That was the thread throughout the whole report.

“There was a women’s health council that was abolished back in 2010, and there has been nothing to replace it.”

“It was about speed and cost, rather than quality,” she said.

Asked about the absence of individually apportioned blame in the report and whether she would like “heads to roll”, Ms Phelan said: “We knew that going in. It was never part of the terms of reference.

“I’m not sure if there’s any merit in [heads rolling] for me. I understand other women and families will feel differently.”