Cervical screening system was doomed to fail at some point, Scally report finds 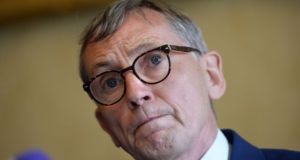 The current cervical cancer controversy came about as a result of a whole system failure, the independent Scally review has found.

In a note to the Minister for Health Simon Harris at the start of his report, the author, Dr Gabriel Scally, said there were many indications that the system in place “was doomed to fail at some point”.

The report published on Wednesday, says there were serious gaps in the governance structures of the screening services.

“In the specific case of CervicalCheck, there was a demonstrable deficit of clear governance and reporting lines between it, the National Screening Service and the higher management structures of the HSE.

“This confusion complicated the reporting of issues and multiplied the risks. It is clear that there are also serious gaps in the range of expertise of professional and managerial staff directly engaged in the operation of CervicalCheck. There are, in addition, substantial weaknesses, indeed absences, of proper professional advisory structures. These deficiencies played no little role in the serious issues that concern this Scoping Inquiry.”

The report said that “unlike many similar problems in healthcare delivery, and screening in particular, it was impossible to narrow the focus to a few or even a small number of areas”.

“The problems uncovered are redolent of a whole-system failure”, the report states.

The Scally report says the current policy and practice in relation to open disclosure in the health service was “deeply contradictory and unsatisfactory”.

It said that in essence there was “no compelling requirement on clinicians to disclose” . It said it was left up to their personal and professional judgement.

Dr Scally said he was satisfied with the quality management processes in the current laboratory sites used as part of the cervical screening service - CWIUH, Quest, and the Sonic Healthcare Laboratories, MLP and TDL. He said he was also happy that the quality management processes were adequate in the former provider, CPL in Austin, Texas, part of Sonic Healthcare.

However the report discovered in August that cervical screening slides from Ireland had been distributed by CPL to other laboratories to carry out at least part of the screening process.

It said that these slides from Ireland had been dealt with by other laboratories in “San Antonio and Victoria (both Texas), Honolulu (Hawaii), and Orlando (Florida).

“This information has only come to my attention in recent weeks. It clearly needs further and detailed examination, along with some closely associated issues of procurement and accreditation.”

He said he wanted to stress that CPL had not been providing such services since 2013 nor had any of the other laboratories to which it had distributed slides.

“All of the laboratories visited by the Scoping Inquiry team are meeting the regulatory requirements current in their own country. There is abundant research evidence that screening sensitivity varies in different countries. As far as can be ascertained, all the laboratories have performance which is acceptable in their country.”

Dr Scally said there were many dedicated and experienced staff working in the screening services, including in CervicalCheck and that their skills and expertise should not be lost.

“With significant system change, effective leadership, improved clinical and public health medicine engagement, plus new and powerful patient advocacy, there is no reason why CervicalCheck should not deliver an outstanding service for the women of Ireland.”

Dr Scally’s report said the continuation of cervical screening in the coming months was of crucial importance.

“My scoping inquiry team has found no reason why the existing contracts for laboratory services should not continue until the new HPV regime is introduced. This new approach of HPV testing will significantly improve the accuracy of the screening process, increasing the chances of more cancers being prevented due to the detection of early changes.”

“Public health programmes, like screening, vaccination, tobacco control or infectious disease surveillance, require a skilled and valued public health workforce. There was, unfortunately, limited public health medicine input into CervicalCheck and I firmly believe that was to its detriment. The time has surely come where public health physicians are accorded the same recognition as clinical colleagues and their skills deployed at the core of all public health programmes. I hope that movement on this matter can take place in the near future.”

As reported by The Irish Times on Tuesday Dr Scally maintained that in his view the establishment by the Government of a Commission of Investigation into the cervical cancer scrfeening controversy “would not be the best way to proceed”.

“In my personal view, there are two tasks that should now be given priority. One is ensuring that the group of women affected, and the relatives of the deceased, are given the maximum amount of support in dealing with the difficulties that they now face arising from these complex and distressing events. The second key task is in implementing the recommendations of this Scoping Inquiry. I am impressed by how your Department is carrying forward the recommendations of my first report and has included representatives of the women and relatives at the centre of its activities. There is a danger that a prolonged investigation, whilst it might further elucidate the matters that I have considered and correct any inexactitudes in this report, would consume valuable energy and resources that would be better devoted to the implementation of recommendations and achieving progress.

Dr Scally suggested that within three months of the publication of the Scoping Inquiry report, there should be an independent review of implementation plans to be produced by each State body named in this report, in respect of the recommendations contained herein. The findings of this independent review of implementation plans should be submitted to the Minister and published.

“ Thereafter, there should be a further review of progress reported to the Minister at six monthly intervals and published. I would suggest that the women and relatives affected should play a prominent part in the oversight of these reviews.”