HSE targets home-help hours in plan to save €500m 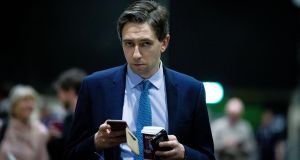 The HSE submitted a paper to Minister for Health Simon Harris’s department outlining ‘savings in the order of €500 million in 2019’. Photograph: Tom Honan

The HSE has targeted home-help hours for cuts as part of efforts to plug a €500 million hole in the health budget this year.

Official documents seen by The Irish Times show the Government fears the HSE could face a financial “challenge” of half a billion euro in delivering services in the current year.

The correspondence between the Department of Health and the HSE warns that “control of expenditure is of paramount importance and the need to secure these significant savings is integral to the success of the national service plan”.

The HSE submitted a paper to Minister for Health Simon Harris’s department outlining “savings in the order of €500 million in 2019”.

One relatively uncontentious area identified for cuts was the use of agency staff within the health service, but the Department of Health baulked at a suggestion from the HSE that home care packages (HCPs) were also in line for cuts.

“There seem to be additional measures targeted in relation to HCPs and home help hours,” a senior official in Mr Harris’s department wrote to the interim head of the HSE in April this year. “It will be necessary for the HSE to confirm that these additional measures will not impact on the agreed service level.”

There has been increasing concern within Government about recent sharp increases in health spending, with fears that another supplementary estimate may be needed for the Department of Health later this year.

Minister for Finance Paschal Donohoe has warned that such spending, if it continues through the year, “would represent a significant risk” to managing spending across departments and could impact the State’s balance sheet.

The Opposition pressed the Government on where it tends to make savings to curtail health spending and both Fianna Fáil and Sinn Féin have repeatedly raised the issue of home-help hours in the Dáil.

A spokeswoman for Mr Harris said “no cuts to home help [are] planned at all. All hours committed to under the service plan will be delivered.”

The documents were prepared as part of a new health service budgetary oversight process based in the Department of Public Expenditure and reveal the Government has now received a confidential plan to generate hundreds of millions in savings.

As part of the plan, the HSE is expected to continue to operate restrictions on employment numbers except where there is specific business case for recruitment or where it is considered additional staff will be essential.

Restrictions will also be put in place on the provision of home-help services or home care packages in some parts of the country. It is understood such services have exceeded official limits in some locations and the new plan will insist that these be brought back into line.

It is expected that official figures to be published in the coming days will show the HSE recorded a deficit of about €70 million in the first three months.

There were 6,310 people on waiting lists nationwide for home help services at the end of April and it was reported earlier this month that the HSE had effectively closed the home help scheme for all new entrants for the next five months.

The HSE denied this but said local managers had been told to stay in line with their budgets “which may impact on their ability to provide new hours into the system”. It also said the allocation of “new hours will be based on clients’ needs and the resources available”.