Liquidator appointed to company behind the association of GPs 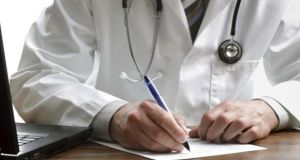 The NAGP has struggled to collect subscriptions due from doctors due to ‘negative publicity’ in recent months, according to chief executive Chris Goodey.

A liquidator has been appointed to the company behind the National Association of General Practitioners (NAGP).

Barry Forrest of Forrest & Co was appointed liquidator of the NAGP, which represents family doctors, at a meeting of creditors at a hotel in Tullow, Co Carlow, on Friday.

The company is being wound up with debts of almost €400,000 and there is no cash available to pay creditors, the meeting heard.

The doctors’ group decided to go into voluntary liquidation after months of internal turmoil, culminating in the sudden resignation of its president and most of its council members earlier this year over governance issues.

The Irish Times was excluded from reporting on the creditors’ meeting but has seen the estimated statement of affairs presented by directors to it.

This shows the organisation has just €13,000 in funds on hand, which is understood to represent the value of a company car. This is expected to be sold to discharge the fees of the liquidator.

The directors say the NAGP is owed €212,000 by various debtors but they do not expect to be able to recoup any of this money.

A representative of the Revenue Commissioners who attended the meeting said it was owed €90,000 and disputed the figures presented in the statement of affairs. This lists Revenue as an unsecured creditor for the amount of €49,545 as well as PAYE/PRSI as a preferential creditor for €25,721.

The largest unsecured creditor is Ulster Bank, which is owed €71,142, according to the statement of affairs.

The list includes a number of hotels and other venues which are owed money, including the Silversprings in Cork, the Glenroyal in Maynooth, the Newpark in Kilkenny, the Clayton in Wexford, the Fleet Street in Dublin and the Hodson Bay in Athlone.

The NAGP has been seeking to link up with the trade union Unite in order to continue representing family doctors.

Speaking after the meeting, Mr Goodey said discussions with Unite were at “an advanced stage” and would be completed soon. He denied the link-up was an odd fit for privately employed family doctors, saying Unite was home to “all types of workers”.

A Unite spokeswoman said discussions on the issue were ongoing.

The NAGP has struggled to collect subscriptions from doctors due to “negative publicity” in recent months, Mr Goodey said, and a €200,000 rescue package that had been arranged had fallen through for the same reason. The organisation still had 1,200 members, he said.

1 Coronavirus: 50 new cases as Glynn says phase four delay disappointing for many
2 Fresh investigation into the murder of Michaela McAreavey in Mauritius
3 Funeral of John Hume hears peacemaker ‘gave dignity and life to so many people’
4 Irish in Canary Islands: Life has changed dramatically
5 NPHET calls for ban on non-essential travel from countries with high Covid-19 rates
Real news has value SUBSCRIBE