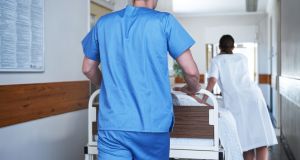 Given the lateness of the deferral of the strike, there still could be disruptions in hospitals and healthcare facilities. Photograph: iStock

The Government may bring forward additional payments to thousands of healthcare support staff as part of a move to end a threatened strike.

A 24-hour stoppage by groups such as healthcare assistants, laboratory aides and porters scheduled to commence on Thursday was deferred on Wednesday evening to allow for emergency talks at the Workplace Relations Commission on Thursday and Friday.

However, Siptu warned that preparations for further strikes, scheduled to take place on Tuesday and Wednesday of next week, would continue.

The dispute is over what the union described as the failure of the Government to implement the findings of a job evaluation scheme for healthcare support staff which could see some staff receive increases of €1,500-€3,000.

The union had contended that the Government in previous talks had sought to delay payments of the increases until 2021.

The new Government proposal is expected to involve paying the increases next year.

Given the lateness of the deferral of the strike, there still could be disruptions in hospitals and healthcare facilities. The Health Service Executive said hospitals would try to reinstate services and appointments “in so far as possible” and would contact patients directly to advise of any appointments and procedures that can proceed tomorrow.